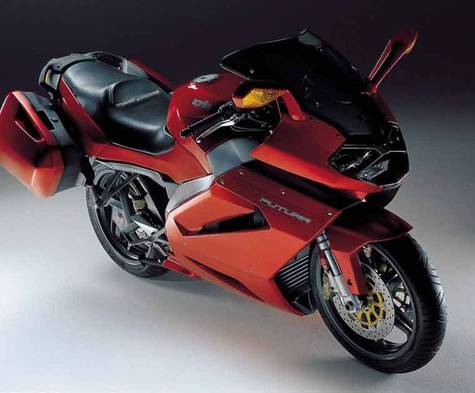 Aprilia RST1000 Futura needs a successor! The Time has come for it!

Dear Aprilia team, please read carefully and DO NOT just delete it!

If you have ever owned, rode and/or still ride an Aprilia RST1000 there's no chance that you probably are not dreaming about a newer 2016-2017 V4 version. We all do. This bike is unbelievable in terms of comfort, all-round capabilities, but then again very well blended with its sports nature. This bike is what all sport tourers should look and ride like in all means - design, ergonomy, torque, speed, innovation, style and luggage capacity.

The time has come, Aprilia, offer us an updated version, we, the never ending lovers of the bike and potential buyers will help you so your next try in the segment will succeed commercially.

Why the time has come?

Shortly said: There's NO REAL substitute in the segment of the mid-sized REAL sport-touring bikes.

Kawasaki has Z1000SX which is a badly converted from a naked bike (Z1000), no wind protection, small in size, bad suspension. Honda are trying to save the image of their VFR by offering us another 800CC bike, the VFR800F(RC79), but it is again far from the perfect blend - small in size, bad wind protection, ugly and pointless in desing, not enough suspension settings, bad luggage options, already outdated engine. As a consumer I doubt it holds the spirit of RC46 VTEC. Triumph used to be on the right track when they have been offering the previous version of their Sprint ST1050, but now with the GT variant it’s too touring and very little sport. Kawasaki ZZR1400 is WAY too big in all means, unnecessary fast and bulky. The same goes to Suzuki GSX1300R also it is well far behind from the others in terms of innovation and technoloy.. Honda VFR1200 is a little bigger than needed, loses it’s Sports nature by using the driveshaft mechanism, 60% touring bike. Another bad example of what crossing over SHOULD NOT LOOK AND RIDE LIKE.

The offerings from the other brands simply DO NOT comply with the unwritten sport touring laws of design and technical capabilites. We won’t call “sport tourer” a bike which is actually WITHOUT raised clip-on bars, a blend of an enduro and street or sport bike. This is Adventure-Street/Sport bike. Aprilia, be wise, think, and beat the others in their own game. Be a game changer! You know how to do it!

Let me please show you our collective view of the future Futura:

Ideally, a sports tourer is a bike holding enough sports handling capabilites when compared a true sports bike, but spreading its manner not in such agressive manner a sporstbike would. It is a sportsbike for the ones that want to ride every day to work, on a distant trips around Europe and the States, without any fatigue, and a bike very capable but not perfect on the track, but outstanding in terms of handling when ridden on a curvy roads. A bike for the real motorcyclists offering the latest trends in terms of engine management, safety and design. A real distance eater in high speeds, yet safe and fuel efficient. A machine that turns in truly capable sports bike after setting the suspension and the engine settings, yet safe and stable when ridden off the track through the mountain passes. A machine which never lacks torque for another overtaking. The bike returning from the future to show again what the future will be!

Aprilia, as you can see by our signatures - there’s is interest in the idea of continuing the sport touring segment, the real sport-touring segment. Be wise, do not miss your chance!