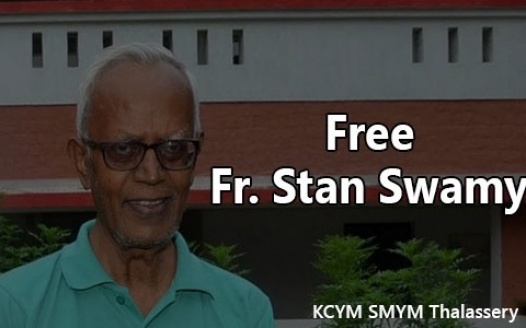 KCYM is the official state and regional organization under the auspices of the KCBC Kerala Catholic Bishops' Council. It is affiliated to the National Youth Body the "Indian Catholic Youth Movement" (ICYM).

We are writing to you seeking your urgent intervention in the case of arrest of 83-year-old Jesuit priest and Adivasi and human rights defender Fr Stan Swamy on 8 October, 2020, in connection with the Bhima-Koregaon Elgar Parishad case. Swamy is the 16thand the oldest person to be arrested by the National Investigation Agency (NIA) in a case in which prominent human rights defenders across the country have been arrested under the draconian Unlawful Activities (Prevention) Act (UAPA).

About the Human Rights Defender:

Fr. Stan Swamy is a Jesuit priest and human rights activist from Ranchi in Jharkhand. After his stint as Director, Indian Social Institute, Bengaluru and his association with JOHAR (Jharkhand Organization for Human Rights) in Chaibasa, Swamy moved to Ranchi and founded Bagaicha, a Jesuit social research and training centre. He has been active at Bagaicha for the last 15 years, and has worked in collaboration with people’s movements that are working against unjust displacement, human rights violations, illegal land acquisitions, and policies that were designed or amended to acquire more land, making the indigenous people landless.

We further contend that he has been forcibly picked up by the NIA without any arrest warrant or memo and we fear for his life and liberty. He has been interrogated for over 15 hours in the last few weeks and has always co-operated with the investigation agency in the past.

We also bring to Hon’ble Commission’s attention about the misuse of terror legislations against prominent HRDs of this country. We urge the NHRC to take definite measures and place before the appropriate court, the urgency that these HRDs are released on bail, most of them now languishing in prisons for almost two years now. Awaiting your immediate response and action on India's biggest human rights violation issue .