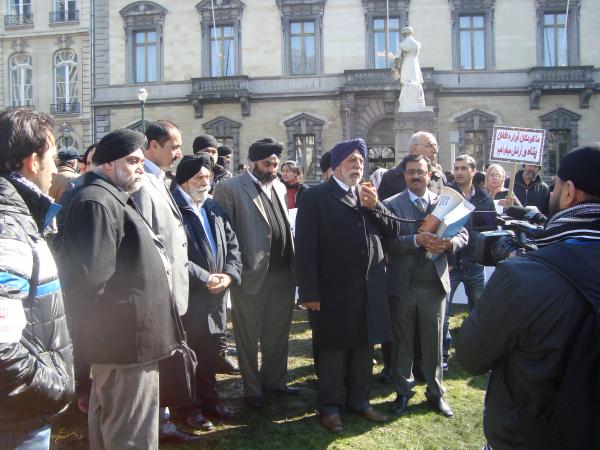 Appeal For Afghan Hindu and Sikh Refugee in Belgium !

Appeal Form the side of Afghan Hindu and Sikh Refuge's who live in Belgium:-

1)As u know that the hindus/sikhs who live in afghanistan had to face atrocities and human rights voilations from the side of local afghan muslims on the daiely basis.

2)And also due to long prolonged war living their noramally and to earn once living has become vertually impossible.

3)Also as u all know their is not a single school for non muslim community and moreover our young hindu/sikh girls are unable to venture outside their houses because local muslims boys and men keep a bad eye on our young women and daughters.

4)And if so ever our any local hindu/sikh brother and sister expires inside afghinistan our people are stopped from creminating our deceased..and also while being taken our deceased for creminotion local muslims throw stones on our people.

5)Our people are not only discriminated by local muslims but the constution of afghinastan also discriminate us. if anyone goes through afghan constitution...it treats our people worse than second class citizens and the local afghan muslims treats us in the same way.

6)As u know majortiy of our hindus/sikh's who go for the interview for obtaning pernemenant residence in belgium got rejected due to their illetraciety(because they are unale to read or write)and some questions are such a type that they are unale to understand..also second most important thing that whenever they go for giving interview for rejection the translator made avillabe to them is always a afghan muslim...thats why the real truth never comes out.

7)Their are about 300 hindu/sikh refeuges living in belgium(since last 2 to 6 years) whom consulate of belgium governement had denied them form giving status of refugees. because of this sisuation they have come on the road along with their women and innocent children (since last 2 to 6 years )governement of belgium has also stoppend extending any kind of monetary benifit of these people (minus medical benifit)governement had denied them any type of benifit.

8)And also it is matter of great concern and grave ironay that the countary belgium which is the jewel of whole europe...our children living their cannot go to schools and these people still are waighting for their papers for the last 2 to 6 years...therefore i urge u all good people to have mercy on these poor refeuges and take pity on their very harsh condition which they have to face on day to day basis and reconise them as real refeuges.

9)I also want to inform u that out of 1,00,000(one hundred thousand)hindu/sikh refeuges...only 600 people live in belgium out of which 300 people are having legal documents along with the proper nationality of belgium. these 300 people are either involved in doing business or doing different kind of jobs.if our belgium governement give refeuge status to remainig 300 odd people by issuing them papers...i assure u that 50% among these 300 peple will start their own business imediate basis.

10) When the children go to the government schools, they face problems. The children of Muslim brothers don’t know who we are. They hate our children. For instance, some of them cut off our children’s hair, while others make fun of them. They regard them as strangers, not as Afghans.
11 ) Our Community living in Afghanistan is not recognized from Local Residense as Afghans, They are being discriminating through Local Muslims.

of Belgium has shown 85 million Euro savings of funds over these refeuges is the money saved out of people who are already in very distressful and sorrowful position.i dont think this kind of money can be used for devlopment of any countary.such type of money is worthless which is saved out of people who already living in very worse sisuation and this kind money is being saved by kicking very small and innocent children out of school.

Therfore i kindly humbly urge you to have mercy on these homeless refeuges and grant them status of pernemenantrefeuges by providing them legal and lawful papers.i urge you to help these people..plz..plz..plz...

In behalf of all Afghan Hindu & Sikh Society Belgium