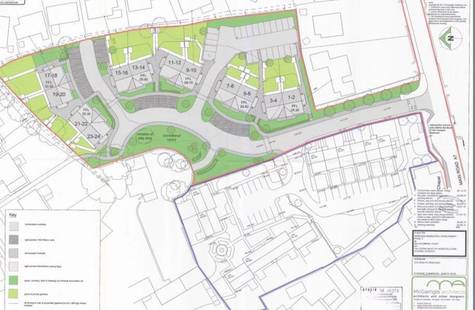 As residents of Colby we have a number of objections to the above mentioned planning application for 24 properties with 49 parking spaces on open space at Ballacubbon, Colby, Isle of Man.

1. The properties around the A7, Colby Glen Road, Croit Ny Glionney and the Ballacriy estates are typically characterised by medium to large plots with large spacing between. The proposed dwellings are two storey houses made up of two apartments with small plots. The elevation proportions of each property are larger than the neighbouring detached houses and bungalows. Further, the proposed dwellings are apartments which are unlike any other property in Colby.

The proposal would demonstrably harm the amenities enjoyed by local residents, in particular safe and available on-road parking and manoeuvring, traffic flow, valuable green space, privacy and the right to enjoy a quiet and safe residential environment.

2. The proposed dwellings will significantly alter the fabric of the area and amount to serious ‘cramming’ in what is a low density road. The nature and orientation of the plot means that the gardens are very small for two-storey two apartment dwellings, particularly compared with the larger plots typically enjoyed by the surrounding properties. The proposal allows very little space for landscaping and we believe that it would lead to gross over-development of the site.

This overdevelopment is clearly shown by the increase from the 14 dwellings referenced for the Ballacubbon site (which importantly includes the land either side of the access road) in the Area Plan for the South and the Arbory and East Rushen Local Plan (1999) to 36 properties now planned (the 12 properties already built under Phase 1 and the 24 that have been proposed under Phase 2). Further, the design team admit in their statement that the plan breaks the density limitations set forth in the Area Plan for the South.

The development as proposed clearly represents high density housing (almost tripling the proposed amount of properties listed in the Area Plan for the South and the Arbory and East Rushen Local Plan), cramming and is a direct contravention of numerous policies set forth in the Strategic Plan and the Area Plan for the South. Therefore, the development as currently constituted does not respect the site, surroundings and adversely affects the character of the townscape and locality all in clear breach of the Second General Policy of the Isle of Man Strategic Plan and as a result, the proposed development would not result in a benefit in environmental and landscape terms, to the contrary it would lead to the loss of valuable green space.

4. Properties immediately surrounding the open space at Ballacubbon will be severely overlooked from the top apartments of the proposed properties, resulting in a serious invasion of privacy. We are also concerned about the possible noise pollution from such high density housing in close proximity to other residential property gardens and the subsequent loss of facility to those owners.

5. Since the date of the traffic survey used to form part of the application (2011) there has been over 90 houses built in Colby alone. Additionally there has been a large housing development started in Port Erin. This survey is five years out of date and is not fit for the purpose for which it is intended and provides a misleading picture of the current traffic situation along the A7.

The issues outside Arbory school are apparent for anyone who travels along this road between 8 am to 9 am and 5 pm to 6 pm and we believe that this is currently a safety issue for drivers, parents and children. If one considers that at a minimum an additional 190 cars from Colby alone are likely to travel along the A7 from the date of the last survey, we believe that the building of this development and the additional 48 cars that it would bring would adversely affect highway safety for drivers of vehicles, parents and children worsening an already unsafe situation. Further we believe that it will increase journey times and discourage pedestrian movement in Colby and Ballabeg due to safety concerns.

Access and egress to the plot will impact the junction with the existing main road. 50 cars will enter and exit next to and opposite bus stops where children catch the bus to go to and from school.

In light of the issues highlighted above we strongly oppose the proposed development at Ballacubbon, Colby.