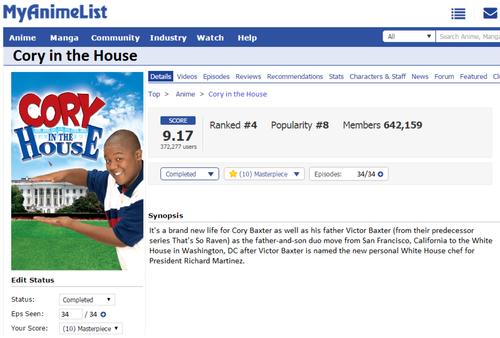 Petition to add "Cory in the House" to MyAnimeList.net

Since its inception in 2007, Cory in the House has been shunned by critics and elitists alike who claim that "It isn't an Anime" and "Should never be compared to the likes of Evangelion or Lucky Star!"

The growing fanbase tells a different story however. A cult-classic if you will, Cory in the House has stood the test of time and proven to be one of the most innovative, memorable, and entertaining anime series to ever come out of Japan!

One might question then, why has this legendary anime been excluded from the popular anime cataloging website MyAnimeList.net? The answer might lie internally as there might be a committee determined to keep this game-changing title out of their ranks. They're... afraid of perfection.

It's up to us, the petitioners, to raise our voice in protest! No anime shall be excluded from MAL, especially not one with such impressive cultural significance! By signing this petition we hope to sway the minds of the MAL Admins to allow Cory in the House to appear in their database as it was meant to be! Not to be silenced and forgotten in the obscurities of anime history!