Dear President Barack Obama & The U.S. Congress:
As a nation continuing its strong focus on fitness for children, there are several nationally-known figures who have turned their attention to this cause.
One in particular is IMPACT Wrestling's superstar wrestler, Kurt Angle. Kurt is also known for his acquisition of the Olympic gold wrestling medal in 1996 as well as his tenure in World Wrestling Entertainment. Kurt is a heralded actor in the motion picture industry. The children of America would like him to be officially and rightfully positioned on the President's Council of Fitness for Kids.
This is significantly deserved due to Kurt's efforts. He is the part-owner and face of Angle Foods, and has participated in teen fitness challenge events in Pennsylvania. He also heads a supplement company, focused on both high protein and a fiber compound to promote only healthy weight loss and fitness.
He is looked upon as an incredible hero by children around the world and aptly deserves this accolade.
Kurt has expressed serious interest as well, regarding being part of the esteemed Council.
Kind Regards,
Your American Youth 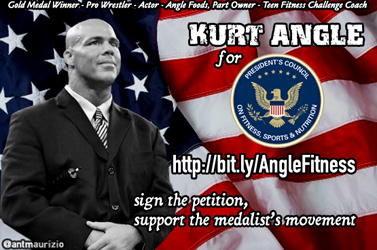 (this petition was created in full support of Mr. Kurt Angle's deserved role on the Council, by Anthony G. Maurizio - @antmaurizio)