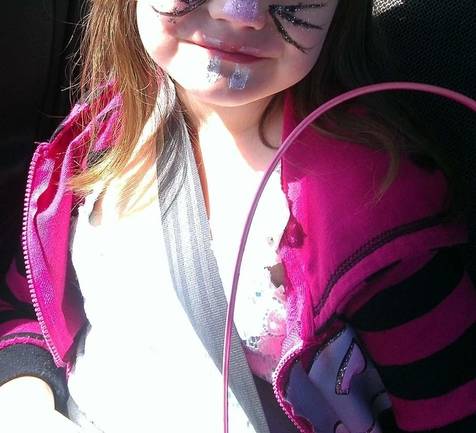 11 year old Gabby intervened when a bully was calling her friend names on the school bus on Valentine's day. The bully then turned on Gabby, removing a package of cherry flavored fun dip from his belongings and opening the packet waking it in her face blowing the powder in her face. Gabby is allergic to cherry flavoring, an allergy which she needs an epi pen. The student who put the cheery flavored candy in her face is also her classmate and was aware of her allergy.

Even though Gabby, and 3 other girls were screaming for the boy to stop that she was allergic, the bus driver did not respond. Girls called out directly to the bus driver to tell her. Gabby herself told the driver what the boys did and that she was having a reaction. The driver handed her a bag to throw up in, sent her to her seat and continued her route while the 11 year old girl tried to remain calm while she started feeling sick from the reaction. Gabbys friend called her mother during the attack and after, a total of 4 calls and 2 voicemails trying to get help for Gabby. When Gabby arrived home she was shaking and crying relaying to her mother what happened. Her mother quickly administered medications and rushed her to the emergency room at Wake Med Pediatrics in Raleigh North Carolina where she was treated.

On the way to the emergency room Ms. Luck called and reported the incident to Lockheart Elementary school in Knightdale.

The following day Ms. Luck took her daughters Emergency room report to the school where she sat down with Principle Daniel Zoller and reported the incident a second time. The principal then made copies of the emergency room report and assured the mother that an investigation would take place and he would get to the bottom of the incident.

Thursday, Ms. Lacorchick, the assistant principle of Lockheart elementary, contacted Ms. Luck and a third report was taken. Once again, assured that wverything possible would be done.

Friday morning Ms. Luck returned to the school and met with the assistant principle again. She was informed that the investigation had ended and all the witnesses were interviewed, the boys parents were called in and told of his actions and he was temporarily suspended from the bus for "a good long time." Ms. Luck asked if he was suspended from the bus for the remainder of the school year and she was told no. She then asked if he was moved to a different classroom and she was again told no because the incident occured on the bus and felt that the teacher could handle any issues that came up. Ms. Luck informed them that it was unacceptable to have the boy remain in her daughters class which would only further victimize the already distraught 11 year old girl. She was told that the bus is seperate from the class and that she could attend 5 counseling session's with the schools counselor and be given and emergency card to leave the classroom to speak to the counselor if she felt overwhelmed. She was again informed that it was not acceptable to ask a child to sit in a classroom day after day with the boy who attacked her and he needed to be moved.

That day Ms. Luck went to the media, the super intendents office fore Wake Coumty Public Schools North Eastern District, as well as the Wake County public school system Department of transportation administrators office, where she learned that not only had the driver never reported the incident, but the principal and assistant principle of Lockheart elementary had also failed to report it.

When the reporter contact the school they were told that there was no evidence of an incident and that Gabby had never made a report.

The school is now using the fact that they didn't report it as proof that it never took place.

The school has gone from protector of the child to the childs biggest bully.

Please help get Gabby the Justice and hold the school and bus driver accountable for the violations they commited in the handling of this incident.