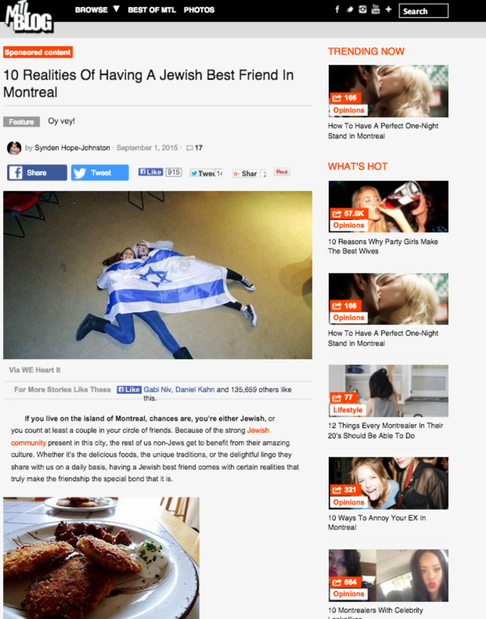 An Open Letter to Federation CJA

First of all, we sincerely want to thank you for all the work you do on behalf of the CJA to preserve and strengthen Montreal’s important and historic Jewish community. It is, we are sure, at times a thankless task, but your efforts do not go unappreciated.

We write you today, however, as a group of primarily young Montreal Jews who are concerned our voices are not being heard or represented properly. Precisely because we believe in Federation CJA’s mission wholeheartedly, we feel it incumbent upon us to bring to your attention a recent instance in which Federation CJA has strayed from its important mandate of “caring for the vulnerable, nurturing and strengthening Jewish life, education and values and advancing our communal interests.” Please understand that we write to you not in order to be quarrelsome or divisive, but sincerely, inspired by the Talmudic principle that it is imperative to raise genuine disagreements for the sake of the greater good (Avot 5:17).

In this spirit, we would like to point your attention to a sponsored article published by the website MTL Blog, a site that has previously been heavily criticized for its lack of journalistic ethics and integrity. The article is entitled “10 Realities of Having a Jewish Best Friend In Montreal,” and it linked to a donation page for CJA’s 2015 campaign; it was seemingly paid for by Federation CJA.

If the article were witty, clever or nuanced we would not be contacting you today. We all appreciate a good roast and can laugh at ourselves (or our culture for that matter) with ease. But it wasn’t. Instead, it perpetuated a stale, unfunny, uninspired and sad stereotype of what it is apparently like to be an upper-middle class Jew. We personally don’t feel as though we fit many of these “10 realities”. More importantly, we feel that for a large swath of our community, these “realities” are not reality at all. The article, for instance, neglects the fact that not every Jewish person from Montreal is by default a member of the upper-middle class. As per a 2011 demographic survey, there were over 18,000 Montreal Jews living below the poverty line, which is twenty percent of Montreal’s Jewish population. These statistics, we hope, sound familiar: they come from Federation CJA’s website. Given that Federation CJA’s mission is to help impoverished Jews in Montreal, an article reinforcing the stereotype that all Jews are wealthy does a great disservice to this noble goal. Organizations like Canadian Jewish Congress historically or CIJA today, have worked and continue to work tirelessly to fight anti-Jewish hatred. The fact that Federation CJA would sponsor an article that has the potential to undermine these important efforts by supporting and reinforcing dangerous Jewish stereotypes about Jewish wealth, influence and character traits is quite distressing and damaging.

Our point is this: as young Jews that are part of the community, we do not want be pigeonholed and we will not sit idly by after the publication of a CJA-sponsored message that perpetuates an overgeneralized and, in some ways, prejudiced portrait of what it means to be a young Jewish person in Montreal. We understand and value the centrality of fundraising to CJA’s mandate, but even if this article helps raise money, we do not accept that the ends justify the means. The article does not reflect Jewish values. Further, it renders anonymous the very members of the Jewish community that Federation claims to help and speak for as part of its mission: the ones who aren’t “well connected,” “obsessed with camp,” or who can’t “[lounge] around at their grandparent’s house in Florida in the winter."

To those involved in CJA who commissioned this piece, we appreciate your effort to be fun, hip and appeal to a young demographic you’re worried about losing. But we believe this troubling article is misguided in that attempt and symptomatic of a larger issue: young Jewish Montrealers do not want to be talked down to or typecast. We are not impressed by “cute,” pandering articles that do damage to the Jewish community and we are disconcerted when we see Federation spending donors’ money in ways that have the potential to both dilute the quality of community philanthropy and misinform those who are less familiar with the Montreal Jewish community. This makes us think twice about wanting to donate our time or money to Federation CJA (and indeed, many of us have done both in the past).

In order to keep young Jewish Montrealers engaged in the future, we hope that CJA will make stronger efforts to paint a picture of the Montreal Jewish Community that actively reflects its diversity and inclusivity. We want to make a difference and we believe strongly in not only the value of charity but the value of justice as well, which is at the root of the Hebrew word for charity (tzedakah). Perhaps future attempts at youth outreach could shed light on Federations numerous social justice initiatives.

Ms. Laxer, Ms. Corber and Federation CJA Board of Directors, we noticed that the MTL Blog article has been taken offline and we applaud you for this decision, but this is not enough. The article has already reached a wide audience and, we believe, has caused significant damage by not only perpetuating dangerous stereotypes of the Montreal Jewish community to outsiders but also in threatening to make those who do not fit those stereotypes feel unwelcome in our community.

If Federation CJA wants the continued support of serious young Jewish Montrealers, we ask you to please issue a public, prominent apology for the damage done by sponsoring the article. We would also hope that CJA would take the time to articulate its vision as to how it plans to be inclusive to young Montreal Jews of all backgrounds in the future and provide meaningful opportunities for tzedakah. We are sure that many of those who have signed below would be more than willing to help bring this vision to fruition.

We thank you for your attention to this matter, and again for all the work you do on behalf of the Jewish community.