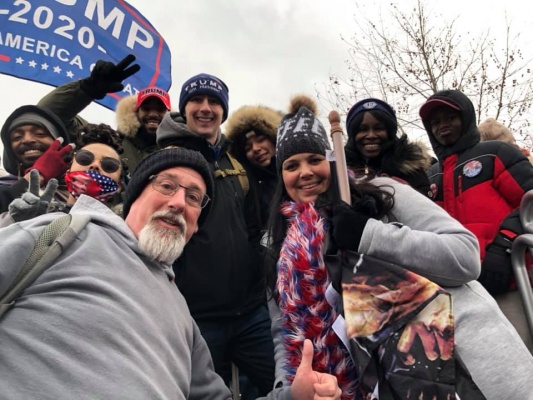 Character assassination of an amazing teacher, a youth pastor and US army war veteran. Please help us fight for TRUTH and LIBERTY!

On January 6, I traveled with a group of friends and family to the US Capital to show support for President Trump and to stand with fellow Americans to unite and pray for our country and “healing in our land”.

One of the people who traveled with us was my friend and brother in Christ, Jason Berry. Jason is a war veteran who has fought in combat in Iraq for our freedom. He is an exemplary teacher, a Christian, a youth pastor, author, and a teacher for Susquehanna Township School District. He is also well known to many as a faithful follower of Christ and a man of deep conviction and prayer. His passion for Christ is what led him to join us on our trip to the capital.

When we arrived in DC, Jason immediately began to look for people who may need or want prayer, and we began to record those prayers to remember this historic day. Later that day, we peacefully marched with over a million others towards the capital where we gathered for more prayer and worship. (Please note, cellular signal was weak at best and no one in our group was aware of anything except God’s presence as we prayed and worshipped Him.) Jason ran into a few other believers who were also praying. We joined with them to worship God and pray. By this time several people came to Jason with their personal prayer requests. Those prayers and rejoicing caught the attention of several people who then posted on tik tok. His actions were also shared on a Christian TV News Network.

When the clip aired of Jason praying, an immediate attack against Jason and his character emerged accusing him of insurrection and violence, (Couldn’t be further from the truth.) and demanding the school system he is employed by to fire him. They were persecuting Jason for his faith in Christ and for the video of him praying. The slander continued and an online petition was started which lied about Jason and gained 5000 networked signatures from people who have no first hand knowledge of the event, nor Jason’s actions that day.

The petition didn't show the prayer video and depicted Jason as a terrorist. The liars even called him racist, and if you look at the picture of our group, you can see that is garbage. It is pure slander and a smear campaign to dishonor an honorable young man. Jason took an approved personal day from the District and had every right to be there.

Stand with Jason against this persecution of his faith, attack on his character, and degrading lies of wickedness. If you are tired of people attacking our freedoms and constitutional rights, then join us in fighting back and signing this petition in support of faith and healing in our land. Stand with Jason and other believers to push back against this heinous attack and character assassination. Sign to show your support of this beloved teacher and veteran!