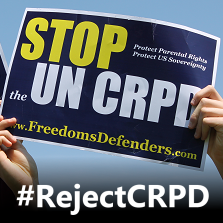 The undersigned youth call on the United States Senate to reject the United Nations Convention on the Rights of Persons with Disabilities (CRPD).

It may sound good to support a treaty that claims to protect the rights of those with handicaps. However, these United States of America are a sovereign nation that already has one of the best track records in the world for looking after the rights of those with disabilities. Handing power regarding this issue to UN officials and their designated social workers is not necessary or prudent. Governmental treaties that start small and sound innocuous often become intrusive later when the rules change and the rights of the parents of handicapped children are negated. We must keep the hands of the United Nations out of our families. We don't want or need them to get involved in decisions of US families, and we are especially concerned about the impact this treaty could have on our future families. We urge the United States Senate to oppose ratification of the CRPD.

Freedom's Defenders When we reach 1,000 signatures, we'll be sending this petition to several US Senators, including Sen. Rand Paul and Sen. Mike Lee who have been front and center in the fight against CRPD, as well as GOP Senators who voted in favor of the treaty in December, such as Senator John McCain.

Call Your Senators Now!
Make sure they know that you oppose the CRPD.

RejectCRPD on Facebook
Join the online community of Americans opposed to the UN CRPD!

www.FreedomsDefenders.com/CRPD
Resources and information for conservatives looking to make an impact.
On Twitter: @DefendFreedomUS

www.ParentalRights.org/CRPD
An organization seeking to protect children by empowering parents.
On Twitter: @ParentalRights