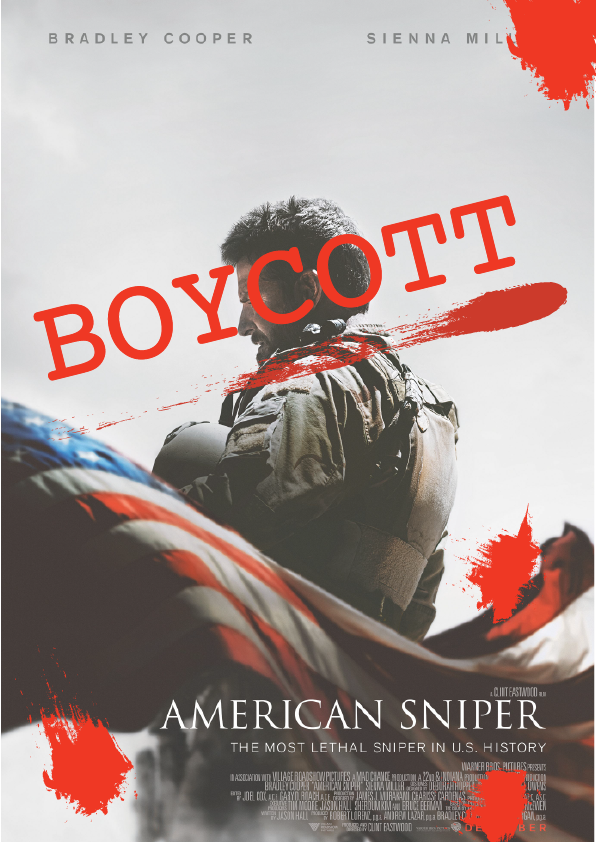 We are a group of citizens from Lebanon and the middle east (christians, muslims and other faiths) who are infuriated by the racism and blunt deception of the movie "American Sniper". This is not right towards the millions of innocent Iraqi lives that have been killed, maimed,

We call all the people to sign this petition to call on the world to boycott and voice their anger towards such blatant disregard for human respect, lives and history.

Below is an article entitled " "American Sniper" spawns death threats against Arabs and Muslims" that explains the level of travesty this movie has reached.

Following the release of the filmAmerican Sniperin theaters across the US, the American-Arab Anti-Discrimination Committee (ADC) has warned of a “significant rise in violent hate rhetoric targeting the Arab and Muslim-American communities.”

The ADC believes the threats “are directly linked to the negative media coverage and hateful propaganda launched against the Arab and Muslim communities following the attacks on theCharlie Hedbooffices in France” earlier this month. But the civil rights organization notes that racist threats have intensified in the wake ofAmerican Sniper, with moviegoers taking to social media to express their desire to murder Arabs and Muslims after leaving the theater.

Having both watched the movie and read the book on which it is based, I am not the least bit surprised by the incitement it has spawned.American Sniperis brilliant propaganda that valorizes American military aggression while delivering Hollywood’s most racist depiction of Arabs in recent memory, effectively legitimizing America’s ongoing bombing campaigns across the Middle East.

American Sniper, directed by Clint Eastwood, is based on the autobiography of Navy SEAL Chris Kyle, reputedly the deadliest sniper in American history.

Replete with hatred, bigotry and unrepentant bloodlust, Kyle’s book boasts of killing 160 Iraqi “savages” during his four deployments in Iraq following theillegalUS invasion and occupation in 2003.

“Savage, despicable evil. That’s what we were fighting in Iraq,” Kyle writes in his book.

“They hated us because we weren’t Muslim. They wanted to kill us, even though we just booted out their dictator, because we practiced a different religion than they did,” adds Kyle, who goes on to confess, “I don’t shoot people with Korans – I’d like to, but I don’t.” In Kyle’s mind, all Iraqis who resisted the invading US soldiers were irrationally violent religious fanatics.

In stark contrast, Hollywood sanitizes Kyle, humanizing him as a complex, likable and anguished hero.

Following the movie’s debut in select theaters on Christmas Day, author and journalist Max Blumenthal and I weredeluged with death and rape threatsfor tweeting our disgust with Hollywood’s glorification of a mass killer and exposing the racism and lies espoused by Kyle. Although Kyle’s most ardent supporters claim to hate ISIS and al-Qaeda, they often call on these terrorist groups to behead critics of US military aggression.

The movie has since broken box office records, grossing $105 million during its nationwide opening and garnered accolades from across the political spectrum (Vice President Joe Biden saidhe weptat the Washington, DC premier). In addition, the movie scoredsix Academy Award nominations.

Frustrated by the glorification and whitewash of a racist mass killer, I posted passages from Kyle’s book on Twitter, highlighting his hateful and homicidal statements and drew attention to the anti-Arab and anti-Muslim threats the movie was inspiring, all of which Icompiled into a Storifythat went viral.

The reaction to the movie has sincesnowballed into a partisan bickering match, withcelebrities chiming in.

Actor Seth Rogen comparedAmerican SnipertoStolz der Nation(Nation’s Pride), afictitious Nazi propaganda filmabout a glorified Nazi sniper that appears at the end of the Quentin Tarantino movieInglorious Basterds(the Nazi sniper is shown mowing down American and British soldiers with great efficiency and apparent moral superiority). Documentary maker Michael Moore also stirred controversy when he tweeted that snipers “aren’t heroes,” though he later clarified he was not referring toAmerican Sniper, which he liked. Nevertheless, awho’s who of rightwing celebrities, pundits, politicians and worshippers of US military aggression have whipped up an ultra-nationalist frenzy, firing back against the movie’s critics.

Meanwhile, growing criticism ofAmerican Sniperappears to be damaging its chances of winning at the Oscars, with Academy membersexpressing concernthat the film glorifies a “sociopath.”

While the canonization of Kyle on the big screen is appalling, the movie’s whitewash of the US destruction of Iraq and its racist portrayal of Arabs has proven to be far more dangerous.

The US destruction of Iraq left an estimatedone million Iraqis dead, 4.5 million displaced, five million orphaned, some two million widowed and birth defects and cancer rates significantly worse than those seen in the aftermath of the atomic bombing of Japan at the end of the Second World War. The US war on Iraq alsofueled the rise of ISIS. Thisimmeasurable sufferingis completely erased from the narrative presented inAmerican Sniper.

In the opening scene of the film a conflicted Chris Kyle (played by Bradley Cooper) is perched on a rooftop with an Iraqi mother and child in the crosshairs of his sniper scope. He watches the mother give the child a grenade to throw at a US marine convoy. He reluctantly seeks permission to shoot.

Suddenly the screen cuts to Kyle as a child hunting with his father in Texas. Another scene shows him at church. Next he’s at the dinner table.

“There are three types of people in this world: sheep, wolves and sheepdogs,”saysKyle’s father. “Now, some people prefer to believe that evil doesn’t exist in the world … those are the sheep. And then you got predators who use violence to prey on the weak. They’re the wolves. And then there are those who have been blessed with the gift of aggression, and the overpowering need to protect the flock. These men are the rare breed that live to confront the wolf. They are the sheepdog.”

For the rest of the movie Kyle is the sheepdog, the protector, the hero. And Iraqis are the evil wolves he must put down to protect the lives of his fellow “sheepdogs.”

Next we see Kyle as an adult. We watch him fall in love, get married and join the SEALs. Then the Twin Towers fall and he is deployed to Iraq, a narrative that leaves the poorly informed with the impression that Iraq was involved in the 11 September 2001 attacks, the very lie that the Iraq war was predicated on. This false narrative is reaffirmed when al-Qaeda appears in Iraq on Kyle’s first tour in 2003, arevisionist historythat conflates indigenous armed resistance to a foreign occupier with a terrorist group that attacked the United States. In a country where43 percentof Americans still believe that Iraq was connected to the 11 September 2001 attacks, perpetuating this falsehood, even if unintentional, is reckless.

“There was a kid who barely had any hair on his balls, his mother gives him a grenade and sends him out there to kill Marines,” says an agonized Kyle. “That was evil like I’d never seen before.”

This black and white, good versus evil theme continues throughout the movie’s entirety. US soldiers are humanized. They have names and families, fiancées and children. And they return home with deep physical and psychological wounds, whereas the local Arab population, including the women and children, are depicted as terrorists. The only time Arab women and children are innocent victims is when they are being brutalized by scary Arab men, but even they are nameless figures.

The “savages” consist of [Abu Musab] al-Zarqawi, who’s introduced via the infamous clip of him decapitating [American radio-tower repairman] Nick Berg; his No. 2, “The Butcher,” who brutally executes an informant’s young son by drilling his head with a power tool, and stores people’s heads on shelves; and Mustafa, a Syrian Olympic sharpshooter who videotapes his kills and hawks bootlegs of them on the street. Mustafa is, like all classic villains, dressed in black, doesn’t utter in a word, and is single-minded in his pursuit of Kyle – he has a poster of Kyle’s bounty, $180,000, on his wall, and spends his spare time spinning an armor-piercing bullet on a table.

In the end, it wasn’t Iraqi “savages” that killed Kyle. A fellow soldier suffering from post-traumatic stress disordershot Kyle deadat a Texas gun range in 2013, a fact the film glosses over before cutting to footage from Kyle’s real-life funeral. Some may have even left the theater with the impression that Kyle was killed in Iraq.

Where are the moderates?

As the threats against Arab and Muslim Americans and critics ofAmerican Sniperescalate in their ferocity, one is left wondering: where are the American moderates? Why haven’t the movie’s director, producers and actors condemned the violent extremism their film is inciting?

(Jim DeFelice, one of the co-authors of the bookAmerican Sniper, condemned the threats of violence unleashed after I implored him to in adebate onUprising Radio.)

Under the threatening circumstances, the American-Arab Anti-Discrimination Committee is encouraging Arab, Muslim, South Asian and Sikh-American communities to be on alert and report any hate crimes to the authorities.

“If you are placed in physical danger because of your ethnicity, religion or national origin: Call the police (dial 911 in most communities), and/orclick here to contact your local FBI office. It is the FBI’s job to investigate hate-motivated crimes and specific threats of violence. You can alsoreport a hate crime to the FBI online using this form,” says the ADC advisory.

“If you feel you have been a victim of a hate crime, of if any individual or place of worship needs any assistance with any of the above, including dealing with law enforcement, please contact the ADC Pro-Bono Legal Department at 202-244-2990 or legal AT adc DOT org.” "