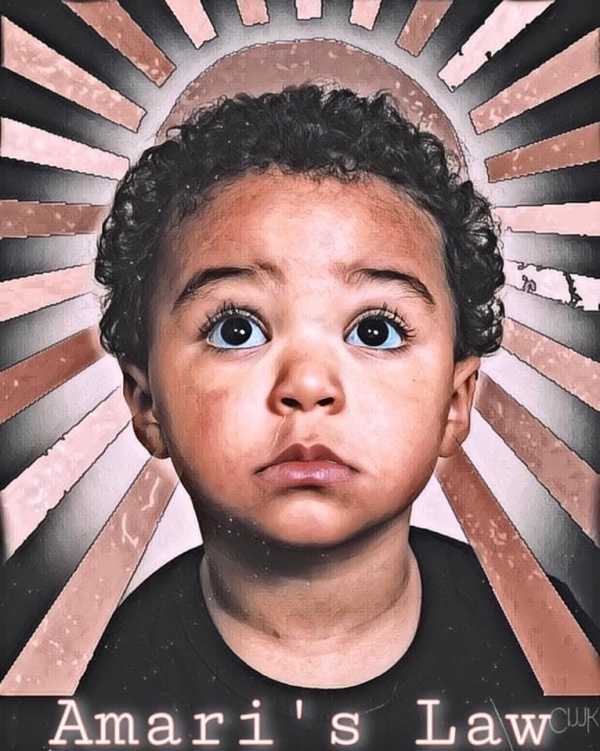 1592 people have signed this petition. Add your name now!

Amari Nicholson was tragically taken from this world in a violent murder at only two years old.

When his mother’s boyfriend confessed to police, we knew our mission had drastically changed.

Our hearts sank. Our worst fears were becoming reality.

Amari was beaten to death.

If you turn on the news you’ll hear three more children were murdered and the same tomorrow and the day after that -the cycle never stops.

Often times we heard CPS was involved but the child ended up being murdered months after.

Amari was left in the care of the mother’s boyfriend and trusted him with his life- only for him to get beaten to death.

We want to introduce a bill to help protect children, improve missing protocols, and hold accountability on those who harm children. Including those working in careers meant to PROTECT CHILDREN, CPS, too many flaws in the laws that keep these children in the grasps of their abuser, and more tragically often than not, they end up murdered, with plenty of warning signs for CPS.

The caregiver of the child(ren) should be held to some accountability if they know the person(s) they are leaving their child(ren) with have history of abuse or neglect on them or the child(ren) or any others ... there’s to many options available to ensure that kids have a safe childcare and safe places to live (shelters for domestic violence victims and children) these are extreme abuse cases, meaning they complied to CPS programs just to comply but still physically abused the child / murdered the child. An example: the responsible custodian of the child knowingly placed their child in a circumstance that results in death, reckless endangerment.

If laws are in place we are hoping that parents might be more responsible with whom they allow around their children. We cannot deny that there is a problem with these very circumstances when every week there are multiple stories a child was murdered by a non blood related "caregiver". There will always be exceptions due to circumstances out of the parents control. Babysitter, daycare, foster care.... If these cases occur the evidence will clear the parents of any wrong doing. Nothing in this bill will hold parents responsible for unknowingly leaving your child with a murderer. That's not what this bill is targeting.

If the person chooses to stay in a relationship or home with the abuser that person should make arrangements for the child(ren) to live someplace else then.

Cases of clear reckless endangerment need to be held accountable.

Improved programs nationwide that extend the criteria of what meets the standards of an existing program Amber Alert.

That time can mean all the difference in finding a missing or abducted child.

Certain States the criteria requires a vehicle description, but in tourist states/ areas, this can prove to be a problem. Valuable time wasted while a child has been taken on foot.

Also, a text alert system for children lost or taken on foot nationwide.

Example- we get an alert on our phones in my community if a child is out wandering and lost. WE all receive an alert with the description of the child : age, height clothes last seen in and an affected area. Not every state has this and we think it is vital in high population areas.

If you’ve ever volunteered for CPS you know that child protective services and the laws in place that they follow are structured to actually keep families together.

But if you’ve ever had to deal with them from a citizens point of view the experience is vary from case to case, often there are cases children are left to die in homes they should have be removed from. In order for CPS to change we have to research those laws by state and see where they need improvement. It’s not an easy task but we can fight for it together.

We need serious improvements with these government programs that exist to protect these innocent children and help build stronger families.

There have been many CPS cases where the mother has also been a victim of abuse and there has been no protective program to save them. IF we can create a special program that specializes in these extreme abuse cases, we can save more families.

We also want to work on building community outreach programs in Amari’s name. We are willing to team up with other nonprofits in different areas of the country to establish this.

Disclaimer : I have had dozens of messages about if this is still happening since I left the Justice for Amari group now Missing Justice, I did leave the group, I am not in the group any longer, only due to constant fighting, I couldn't concentrate on what really mattered, THIS! That doesn't mean I am giving up on this bill, I am more than happy to lobby Amari's Law to legislators, and I have formed a solid knowledgeable law team to do so. I just needed a productive environment to help promote the petition. This is for children that are in desperate circumstances and need our help. Too many mothers are KNOWINGLY putting their children at risk, too many missed criteria in every day Amber Alerts. Too many Missing Kids cases where DCF was previously involved.

THERE IS SO MUCH WORK TO DO!!! WE NEED YOUR HELP! ONE SIGNATURE ONE SHARE!

I WANT TO SAY THANK YOU TO The Women Empowering Marketing network for pulling all night research sessions with me studying state laws, for all the helpful law advice from my lawyers office, and how to become accredited for our community outreach program through the state so we can start our volunteer program!!!! They have been working so hard with me nonstop for weeks, I had to reach out to dozens of groups to help me and for that effort I would like to thank the murder mystery groups, mom groups, women in business groups, Amari's Voice and all the members that messgaed me you guys are glue keeping this project together! I want to thank even all my dogs groups, and my old marketing network for sharing and signing the petition. Thanks for bringing some positive energy my way on this journey.