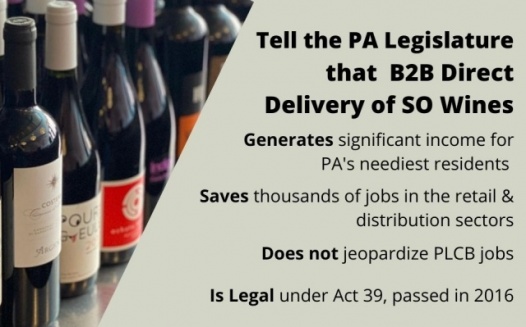 Allow Direct Delivery of SO wine in PA

We are writing to ask the Commonwealth to allow direct delivery of Special Order (SO) wine to PLCB licensees who hold Wine Extended Permits (WEP), which permits them to legally sell wine to-go.

These license holders are already able to legally sell wine to-go to the public, and thus can generate income to retain employees and continue minimal operations while continuing to to generate tax revenue for the state that will be essential as we come through the pandemic. However, they are currently stymied by the arbitrary and unnecessary decision to block direct delivery of SOs to legal license-holders. The legislation that allows direct delivery was authorized in Act 39, which was put into effect in 2016.

However, the PLCB is only allowing for direct-delivery of a minimum purchase of 50 cases, and only of state-Listed items. Thus, only the largest buyers – generally large grocery chains – can continue to receive wine shipments to maintain business operations. This is patently unfair to the thousands of smaller, legal license-holders who simply cannot purchase in such quantity, and is in direct violation of Act 39.

As well, it is devastating to the hundreds of wine distributors whose income depends on the legal sales of SO wine. These distributors, who have the means and legal status to conduct direct-shipment business to licensed establishments, are being unfairly restricted from doing so, as the state has essentially created a new monopoly on who may supply wine to licensees.

In so doing, the PLCB is artificially limiting selection by allowing the sale of only the small fraction of wine available in the PLCB stores as Listed product, promoting its own sales, and suppressing competition from the entities over which it has regulatory authority. These actions raise serious ethical concerns.

Direct delivery from licensed distributors to licensed premises will have a positive impact on the PLCB AND the Commonwealth by increasing revenues. Wine and liquor sales generate millions of dollars in income for PA, including roughly $185 Million paid into the State General Fund. If direct delivery of SO product is allowed, the bulk of taxes and fees currently paid through the model – including the 18% Emergency Tax and the 10% PLCB Standard Markup will continue to be paid. As a result, allowing direct delivery increases revenues into the PLCB, while allowing it to save on labor costs; moreover, it does not jeopardize jobs within the PLCB or, more importantly during these times, public health.

Through its arbitrary regulatory decisions, the PLCB has decreased the viability of wine-to-go retailers and distributors, and also the availability of wine to the public. According to Act 39 of 2016, the PLCB, “shall, by January 1, 2017, implement a procedure for processing special orders which do not come to rest at a store.” The PLCB has yet to comply with this legal mandate. Every day the PLCB continues to artificially limit direct delivery of SO wines will result in unemployment for thousands of Pennsylvanians who work in restaurants or for wine distributors, and will result in the loss of millions in tax revenue.

Permission for direct delivery to- and by- legally-operating entities will increase money into the PLCB coffers, decrease job loss across Pennsylvania, and benefit citizens seeking access to diverse wines.