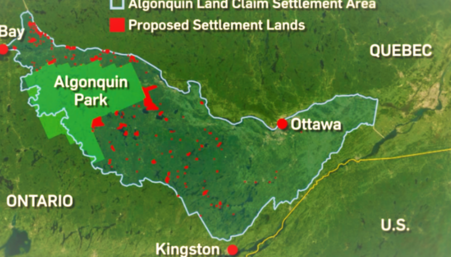 A preliminary agreement between the Algonquin First Nations and the governments of Ontario and Canada was announced in December 2012. It will transfer to the Algonquins over 200 parcels of valuable crown land in Eastern Ontario adding up to 117,500 acres as shown on the map. To see the details of each of these parcels please click on the interactive map at http://www.tanakiwin.com In addition they will receive $300 million of taxpayers' money plus interest from 2012 forward. As well they are entitled to almost unrestricted hunting and fishing rights over a huge part of the region shown.

The deliberations leading to this preliminary agreement were done largely in secret and with virtually no public participation over almost a twenty year span. We are very upset about it and believe many others in this vast 9 million acre area are too. This petition will be presented, hopefully with strong public support, to the government in June 2016. We trust this petition will persuade the government to rethink many aspects of this whole proposal. The Algonquins will be the only ones who get to vote on this agreement beginning February 29,2016. It is urgent that we take every opportunity for timely democratic input and to complement the petition we plan to organize a public meeting in central, Eastern Ontario early this summer. We want to effect changes to this flawed and undemocratic agreement that benefits only a few Algonquin people at the expense of Ontario taxpayers. No matter how much longer it takes it must be done fairly and properly.

Be it resolved: We the "Concerned Citizens of Eastern Ontario" urgently seek accountability and transparency from the governments of Ontario and Canada and ask that a formal process be established to allow for direct and active democratic participation in the creation of any land claim agreement.