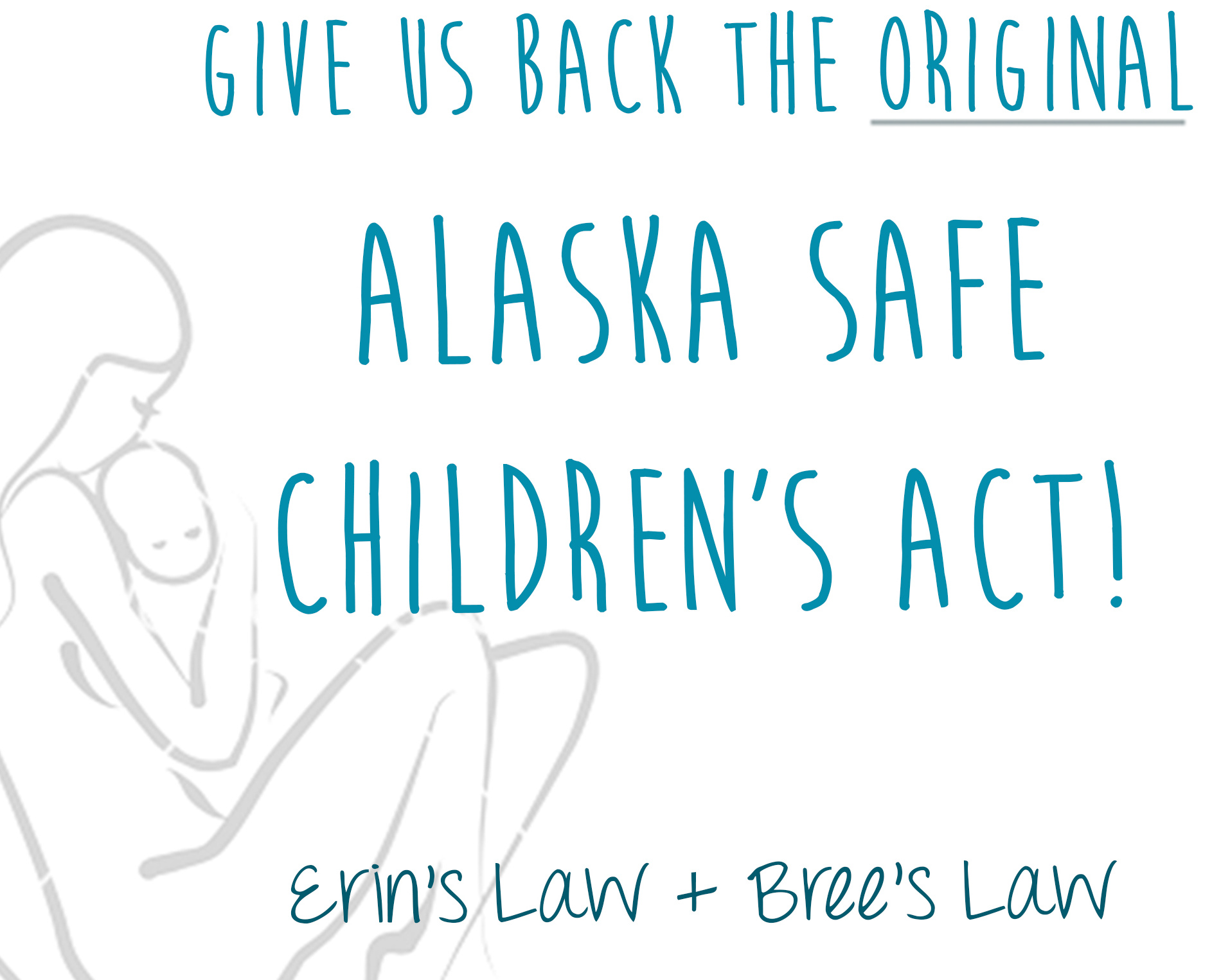 **Donations asked for by this site do NOT go to our cause & you DO NOT have to donate to submit your signature!**

"This bill attempts to stop the acts of violence and educate our young children and teens about what is 'safe touch,' what is abuse, what it looks like, who to go to, who to talk to, and where you can get help if that's the situation that you're in," House Majority Leader Charisse Millett

Alaska leads the nation in rapes per capita, at three times the national average. In 2012, Forbes ranked Anchorage and Fairbanks #2 and #3, respectively, as the most dangerous cities for women. This year, Alaska replaced Tennessee as the most dangerous state, according to the FBI crime data on murder, aggravated assault, robbery, and forcible rape.

The original text of the bill was three pages long and simple. As the sectional analysis explains, the act:
Requires that a school district's school board/governing body will adopt a child sexual assault prevention curriculum, as well as training in said curriculum for staff, and parental notices. This section requires that schools include age appropriate information, warning signs of abuse, resources, counseling, and an opt-out procedure for parents. This section additionally provides for the adoption of dating violence and abuse prevention curriculum. This nearly mirrors the child sexual abuse prevention curriculum, save for the additional definition of teen dating violence and descriptions of healthy relationships.

Dunleavy changed HB44, using it to wedge in proposals he supports — bills that have absolutely nothing to do with sexual assault awareness and prevention... Same as the addition that repeals the requirement for secondary students to take college and career readiness assessments (SAT, ACT, Workkeys). Also, instead explicitly allowing "a parent to object to and withdraw the child from an activity, class, or program because of concern regarding… content involving human reproduction or sexual matters." It also bans Planned Parenthood from providing any materials to public schools and changed the age range of children who would receive the education from K-12 to grades 7-12. This is un-acceptable as Planned Parenthood is the ONLY program that comes into schools to give this education. THIS BILL IS NOT ABOUT PRO LIFE OR PRO CHOICE MATTERS. THIS IS RIDICULOUS!

The original bill was three pages. The committee substitute is 12.
"I'm really concerned that it might take the focus away and might be a little more controversial," Senator Gary Stevens Millett responded in agreement, stating her belief that the CS "basically guts the bill and takes the meat of the bill away."

Cindy Moore told committee members. "The purpose of HB44 is to protect all of our children in the state. It is to give them all the education they need to protect themselves. Why are we letting certain districts teach this and not others? This is not appropriate."

"It took a long time to get here. We have, we've had four different versions of this bill that have been going for two years. This three-page bill, House Bill 44, is three pages. It has two items. It has an Erin's Law version which addresses sexual molestation of children in Alaska which is six times the national average. It also has the Bree's law portion, which we call it, which is the teen dating violence education…. We have 300 percent higher rate of a woman being raped here in Alaska. 250 percent chance higher rate of a woman being killed by a man. In 2014, we became the #1 state in the nation for men killing women. That's the year my daughter was killed. We beat out South Carolina. We're #1. We're also #1 in sexual molestation. This bill is three pages. It addresses those items. The new CS, I mean, we're talking about charter schools in here. We've got one [provision] in here that talks about "provide for development and implementation of a preventative maintenance program for school facilities?" said Butch Moore

"...on the side of good parents that are at home teaching their children right touch, bad touch, teen dating violence; that want to have the right to do that on their own time and in their own language and with their own beliefs?" Millett asked, "or those kids that are possibly being abused and their parents would opt out because they don't want the abuse to be found out."
She noted that more students would receive the education if parents had to opt them out, rather than if they had to opt them in. In a press release sent out Tuesday afternoon, Millett added: "I am concerned that language was included to allow for school districts to opt out of sexual abuse and dating violence curriculum. Keeping Alaska's children safe should not be optional, and I worry that the original curricula loses its effectiveness with this 'opt-out' language."

PLEASE PETITION TO CHANGE THIS BILL BACK TO THE ORIGINAL 2.5 PAGE VERSION, SO WE CAN FOCUS ON PREVENTION AGAINST THE PHYSICAL ABUSE OF ALASKA'S CHILDREN!

Credit to John Aronno for original text via Alaska Commons