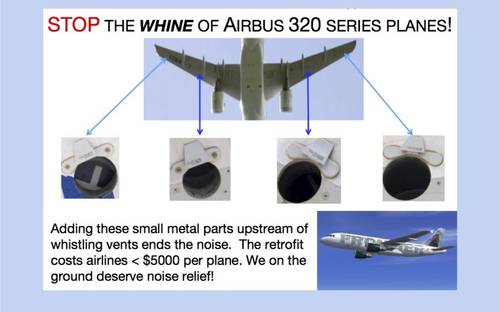 Airlines: Silence Your “Airbus Whine” with the Simple Fix that Will Reduce Noise Distress for Millions of People!

Airlines: Silence Your “Airbus Whine” with the Simple $5000 Fix that Will Reduce Noise Distress for Millions of People!

The shrill whine of the Airbus A320 series aircraft (A318 - A321) is disturbing millions of U.S. citizens every day. These Airbus jets emit a loud, high-pitched tone during landing approach, before flaps and landing gear are deployed, some 10-25 miles from the destination airport. The offending noise is produced as air passes over two small circular vent openings on the underside of each wing—creating a “whistle” tone that is perceived by the human ear as highly disturbing. Large populations living far from airports are repeatedly exposed to this irritating Airbus whine. The noise diminishes their productivity and quality of life. Luckily, there is an inexpensive solution to the problem.

All it takes to eliminate the “Airbus Whine” is a two-inch triangular piece of aluminum called a vortex generator. Mounted just upstream of each circular vent, the vortex generator reduces the aircraft’s ground noise dramatically (up to 8 decibels), and completely eliminates the whining tone. The retrofit requires only a few hours of labor, can be done during routine maintenance, and costs less than $5000 per jet. The huge benefits of this small part are proven; vortex generators have been factory-installed on new Airbus 320 series jets since May 2014.

If the Airbus noise problem is to be solved, airline companies must choose to retrofit their older fleets of whining jets. European airlines--Lufthansa, Air France, EasyJet, and British Airways--have committed to aggressive retrofit schedules for their fleets and have already installed vortex generators on hundreds of their older model jets.

Airlines operating older Airbus 320 series planes in the U.S. have an opportunity to show leadership in environmental noise reduction. Their efforts will be recognized and appreciated by the millions living in communities under landing approach routes. By electing to make a small investment in vortex generators for the notoriously noisy Airbus jets, airlines can earn the gratitude of current and future customers.

We will boycott any airline listed above that has not publicly pledged by February 1st, 2016 to complete the vortex generator retrofit of its entire fleet of the Airbus 320 family of jets.