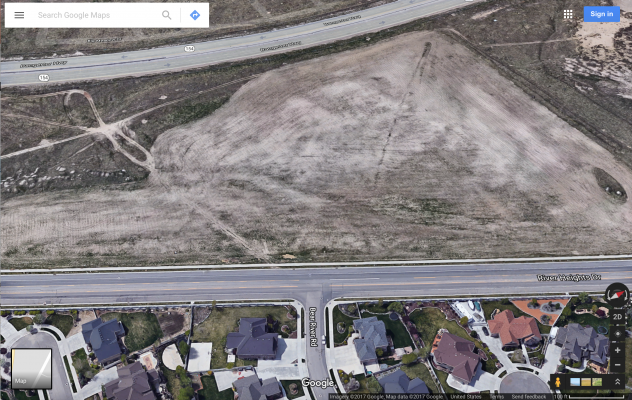 Update Nov. 21. The City Council narrowly voted 3-2 in favor of rezoning the area for primarily residential as an extension to the Harvest Villas, with a small amount of professional office space. The decision is contingent upon a development agreement (contract) between Peterson and the City to ensure the former does not change the plan and develop high-density housing or otherwise after the rezoning. Many thanks to all those who supported this effort! If you're pleased with the outcome, please thank our city councilman, Chris Rogers, who clearly spoke out in favor of keeping the area predominantly residential.

The South Jordan City Council is holding a public hearing on Tuesday, November 21 at 6:30pm at South Jordan City Hall (1600 W Towne Center Drive, 2nd floor east end of the building) to review a proposal to develop the land south of Think Storage, north of Thatcher Park neighborhood, and west of Jones Meadow neighborhood, between River Heights Drive and the Bangerter Highway. The proposal would introduce multi (three-to-six) story medical complexes and restaurants, and expand River Heights Drive from two-lanes with a center turn lane, to four-lanes with a center turn lane.

South Jordan residents oppose this development, as well as any other proposal for commercial development of the land that would introduce significant additional traffic on River Heights Drive and/or diminish adjacent residential property values.