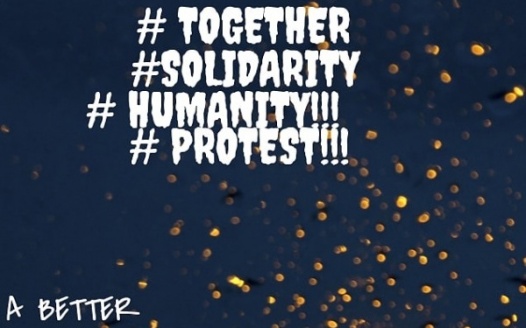 Greetings to you over there,

@Adcenter in collaboration with Cultur Migrant Centre we are organizing Africanlives Matters CAMPAIGN.

A "Virtual Protest" This is a conversational dialogue platform to engage, research, survey and come up with possible solutions that can be made into policy in addressing injustice, racism and police brutality never to be seen in our community.
We are calling on our lawmakers, government, TD's, local councillors, leaders, businesses, educational sectors etc.

Africanlives Matter was founded in 29th May, 2020 in Ireland by Susuana Olatunji Komolafe the CEO/Founder of Afro in Diaspora Center in response to the acquittal inhuman, live excursion of George Floyd , the out cry and Injustice Africa is experiencing from the western, china misused of power on the continent of Africa to be a voice and say (Africa is not a Lab). This is intend to be a global movement of reclaiming our lost resources, reparations of decade of slavery for African Caribbean descendants all around the globe through economic and political justice for our people.

AfricanLives Matter (ALM) is an international initiative that will address human rights movement with focus on African, Caribbean, Blackness, in campaigns and create awareness conversational dialogue against violence, police brutality, human supremacy, consciousbias and systemic racism towards African and Complexion (Blackness) Complexion in humans is the (Natural) color, texture, and appearance of the skin, especially that of the face, the tone or color of your skin.

Consciousbias is to be aware, intentional and responsive consciouslybias in the workplace with laws and policies to address, prevent explicit prejudices based on your skin complexion, age, gender, gender identity, ethnicity, physical abilities, religion, dialect, ascent or tone of voice with the fundamental understanding that we are one race and know racial division allowed. Cousciousbias is something practice base on thought norms, prejudice and comfort supremacy.

Join the Movement to fight for the ability to Breathe, Enough is Enough, Freedom, Liberation from Injustice, reclaiming of economic global power which belongs to Africa, Our Identity by signing up for updates, supporting our work, checking out our resources, following us on social media, or wearing our official symbolic identity of enough is enough.
adcenter25@yahoo.ie

© Susuana Olatunji Komolafe, the CEO of Afro in Disapora Center; my official statement in the case of George Floyd!!© Enough is Enough!! I can't breathe!!!

As an African, and a woman that stand for promoting, profiling projecting a positive image of African Caribbeans in Diaspora, I just can't breathe and enough is enough!! Why? Why? It ring so loud in my ears, wondering how can we thrive in this universe, our world and communities. I'm a mother of three beautiful kids but most expectially I have two young lads, I tremble at the thought of the reflection of the video, the seen and those words of George Floyd!! I can't breathe!!.