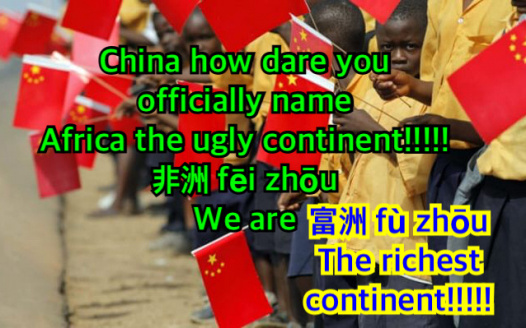 For decades, the African continent, its inhabitants and descendants has been given the horrible official name of 非洲 fēi zhōu in Chinese. It’s literal translation of “ugly continent.” We, the African community and its descendants (African-Americans, Afro-Cubans, Afro-Caribbean Afro-Europeans Afro-Latinos afro-Canadians), strongly believe that the name should be changed to 富洲 fù zhōu which translates to “rich continent;” a name that is more descriptive and adequate for Africa. A continent that is rich in resources, culture and history should be named to encourage strength as China has named USA 美国 Beautiful Country to represent what it believes and stands for. We believe that this change will help Chinese people who look or think of Africa, Africans and their descendants (wherever they may hail from around the world) in a positive way. This in turn will not only encourage more positive relationships between China and the continent of Africa, but lift the burden of such a disrespectful and demeaning 非洲name. It is not only an insult but encourages open discrimination and hostility between China and Africa. We hope that with the upcoming FOCAC meeting this issue too will be addressed!