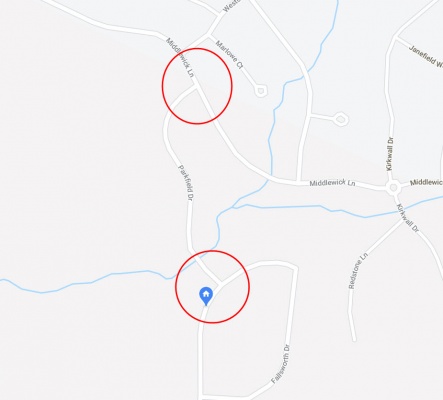 UPDATE - 3/12/2020 - Several of our neighbors have asked that we also include a stop sign at Middlewick and McCauley Lane. This of Middlewick is also a concern because of the speed drivers reach going down the hill.

Burkitt Place/Whitney Park is a wonderful development located at the north end of the city of Nolensville. As Nolensville has grown, so has the traffic that utilizes our roads. The intersection of Nolensville Road & Burkitt Road has seen significant increases in traffic in recent times. With Burkitt Place is located immediately south of this intersection, commuters have discovered that utilizing the neighborhood streets are often a shortcut around this busy intersection.

Access from Kidd Road to Burkitt Road via the Burkitt Place/Whitney Park neighborhood roads is a common shortcut commuters utilize when traffic backs up. They do this primarily because, between Kidd Road and Burkitt Road, there is only two stop signs (Parkfield and Middlewick). Whitney Park Drive is a gentle curve with minimal breaking necessary to make the left hand turn onto Parkfield Drive. This area is densely populated with families of small children. There are bus stops at both ends of Parkfield. There have been several near misses of children and cars along this route. It's a matter of time before a tragedy occurs.

The Middlewick intersection is particularly dangerous because of the unbroken path and the hill that naturally causes cars to accelerate. Middlewick runs unbroken, with minimal curving for nearly 3/4 of a mile. This allows cars to accelerate relatively unimpeded. The intersection of Middlewick Lane and Parkfield Drive is sloped in both directions. This naturally adds speed to cars either accelerating up the hill or gravity pulling them down the hill. There have been several accidents along Middlewick Lane. Luckily they have yet to involve pedestrians, but that is a matter of time.

What we are asking for is three way stops to be added at the Middlewick Lane & Parkfield and Whitney Park Drive & Parkfield intersections. This would not solve all our issues;, however, it would add a much-needed spot to stop cars along a highly traveled path where speeding is an issue. Attached are several photos for more information.

Please sign this petition. Once we have a majority of homeowners that have signed this petition, we will present this to the Nolensville Board of Aldermen and Mayor and recommend action.

Feel free to contact me with any thoughts or questions.