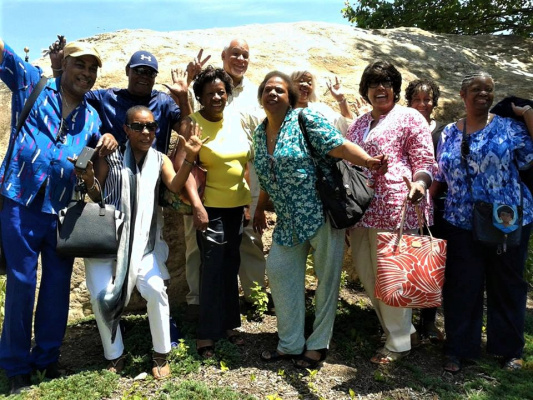 ABOUT THAT GIANT ROCK

The “Giant Rock” has been on Ditmars Boulevard in East Elmhurst for as long as anyone can remember. Once surrounded by an empty lot, it was the playing ground for neighborhood children, and inspired such affection that neighbors have rallied to protect it from removal more than once.

It currently sits in a parking lot near LaGuardia airport, nestled between two hotels. Around 1980, when a Crowne Plaza Hotel was being built on the site, the community of East Elmhurst rallied together to make sure that it could rest in peace. 19 years later, the rock was threatened again, by the construction of the Hampton Inn. They attempted to bast it into tiny pieces, they attempted to dig it up, Once again the community came together, and the rock now stands, where it always has, regal and silent.

The Crowne Plaza hotel put decided to rename the Giant Rock and placed a plaque near it explaining it origins and calling it the Pet Rock . It is 1000-Ton boulder was brought to our community location by an ice sheet about 12,000 years ago.

We have always called it the Giant Rock and we want the plaque fixed. It seems that our letter to the hotels that sit on either side of the Giant Rock have made the decision to ignore us.

"All my siblings & cousins played on the "Giant Rock" It is the largest memento of our childhood." "By the time I came along the hotels were were up and the Giant Rock was sequestered in a parking lot. But, my parents told the stories of high adventure atop and around the Giant Rock. It isn't a pet, it's an icon, a symbol of stability. It is the landmark that tells us we are now home. It is a gift given to this community ions ago. The community embraced it and name it, "The Giant Rock". Respect that please. " " Wonder who told them the name was Pet Rock?" " I was playing on and picnicking on Giant Rock in the 1950's. I grew up on 98th Street between Astoria Boulevard and 25th Avenue long before 127 park was built, before many of the homes were built in our play lots, when we could stand on the outside deck see LaGuardia airport and watch the planes take off and land and wave at the passengers…” IT'S THE ‘GIANT ROCK’- FIX IT!” “" I want to add my voice to this chorus. The Giant Rock represents, excuse the pun, a touchstone for almost every young person who lived in East Elmhurst from 1940 to the 70s. We all have our stories and memories of that rock…” " I remember walking from Butler Street with others on the block, asking my grandmother can I go with them to the giant rock to play. It would be great if you could change the plaque." " Back in the day, some of us would take our trips on any given Saturday to the Giant Rock. It was a big deal back then. They need to respect its given name and leave it alone." These are but a few of the community sentiments about the renaming of our rock without consulting the community.

Therefore, John Reynolds, General Manager of the LaGuardia Plaza Hotel, Jim Norris, General Manager of the Hampton Inn New York - LaGuardia Airport we will not be ignored. community has strong sentimental ties to this 1000-Ton boulder. Many of us have roots in this community going back far as the 1920s. The boulder has always been revered and referred to as the “Giant Rock”, not the “Pet “ rock. We have fond childhood memories of this historic specimen; it is a community icon. We honor it. We are greatly disturbed by the arbitrary renaming of the rock and that it was renamed without any consultation with the community.

As one resident put it, “Neighborhoods change, old folks pass away, kids grow up and leave and new folks come in. But, the Giant Rock remained just that - 'The Giant Rock' - solid and stable.”

The Corona East Elmhurst Historic Preservation Society (CEEHPS) has been asked to act as representatives for the community residents that feel strongly about this matter. We are asking that the current plaque be replaced with one that calls this community icon by its proper name, the name given it by residents of Corona-East Elmhurst— the “Giant Rock”.