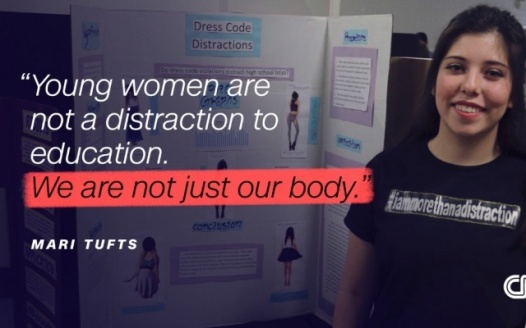 ABOLISH THE DRESS CODE AT NWSS

I am petitioning against New Westminster Secondary School's dress code. I think that these rules and regulations are disrupting a students right to learn peacefully. If a student violates the dress code, they are then taken out of the classroom and told to cover up or go to the principal's office. Although this might seem like the reasonable thing to do, it's quite the opposite. It denies the students right to learn because what they are wearing, might be distracting to the male population of the school. That in my opinion is disgusting. It is not the women's who needs to cover up, it is the men who need to control themselves! The dress code is also gender biased; it has more restrictions on what a female student can and cannot wear to school rather than a male student. I understand that there are reasonable and practical rules that are under the dress code, i:e inappropriate writing. Skirts and tank tops however, shouldn't be. In conclusion, this dress code is in no way beneficial to the students education, (in fact the opposite), and therefore should be abolished.

New Westminster Secondary students generally use good common sense in choosing their clothing, and the school does not wish to infringe upon students’ rights to free choice where dress is concerned. The school does, however, expect students to follow the school’s code of conduct, which states, “Respect Yourself and Others” and “Respect Learning” when choosing their attire for school.

● Any images, slogans or words that are deemed inappropriate include the following: Language and/or images that: ~promote violence ~discriminate against a certain individual or group of people ~display drug, alcohol, and/or sexual references In addition, we ask students to follow these guidelines:

● Tops, skirts and pants will cover the navel

● Skirts, shorts or dresses will (at least) reach the middle of the thigh

● T-shirts, tops or blouses will include straps and display a modest neckline