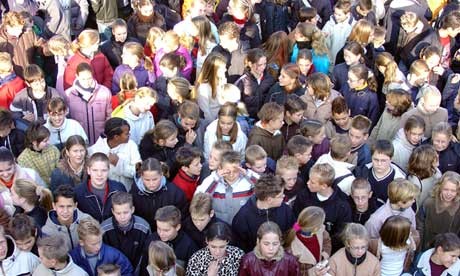 The following is a petition requesting that the school board change the boundary lines in order to keep our children close to home and relieve the current overcrowding in the Southwest area.

According to Forbes, Charlotte is the 8th fastest growing city in the United States. The growth rate between 2000 and 2010 was calculated at 32%, compared to the national growth rate of 9.7%. Charlotte Mecklenburg Schools (CMS) have predicted that the student population will increase to 187,000 by 2018, up from 136,800 in 2009 (a 27% increase). Southwest Middle School (SWMS) has been overcrowded since 2007, with data from 2013 showing the school is now at 137% capacity. The current overcrowding in the Southwest area is an urgent matter, as student enrollment continues to rise.

The current proposal from CMS to alleviate the school overcrowding in the Southwest area is to offer a Science, Technology, Engineering, and Math (STEM) program at Kennedy Middle School. They suggest that this will lead to some of the elementary school graduates in the Southwest area to feed into the Kennedy Middle School (69.6% utilization in 2013), instead of the overcrowded Southwest Middle School (currently 137% capacity). While we agree that the student population needs to be evened out throughout the middle schools, using the STEM program is not the answer. Furthermore, their proposal goes against their own decision matrix for establishing student school assignments.

We want a better proposal than what CMS is currently offering. CMS has a decision matrix with a list of guiding principles for student school assignments. The foundation of this matrix is to guarantee a student the opportunity to attend a home school within the proximity where he/she lives. If the current proposal from CMS goes through, some children will be transported further to attend Kennedy Middle School, instead of the middle school in closest proximity. This could mean up to 2 hours of bus rides per day for the few Southwest students who secure a seat at the proposed Kennedy STEM School over the overcrowded SWMS. This goes against CMS own principle of having cost effective solutions that do not burden the transportation resources further. We want a proposal that is not shrouded with an alluring STEM program, but one that allows our children to stay within our community and provides immediate overcrowding relief in our schools.

What we propose is changing the outdated school boundary to alleviate the overcrowding. The current boundaries were drafted in 2002. Since then, the Southwest population has changed drastically. The highest growth rate in the Southwest district is the western area, where Southwest Middle School (SWMS) is located. Many families with school age children have moved into newly built subdivisions, as well as the already established neighborhoods. There are also large areas of land with predicted housing development in this western area. Kennedy Middle School (KMS) is located in a stable growth area. We propose that the boundaries are changed to target an 80% utilization in this high growth area (SWMS) and a 100% utilization in the stable area (KMS). This will allow for immediate overcrowding relief until new schools are built while also accommodating the predicted increasing student enrollment.

We do agree that a middle school STEM program should be offered in the Southwest school district, but this is a separate issue from the overcrowding in the Southwest school district. The STEM program should not be used as an attempt to solve the current overcrowding. The decision on where the STEM program is offered should be based on keeping a STEM school feeder pattern continuity; the STEM elementary school should feed in to the STEM middle school, and ultimately to a STEM high school. This is not what the current CMS proposal is offering.

While the overall goal is to have more schools built in this area, we need immediate overcrowding relief. Our proposal is more economical than the current CMS proposal (lower transportation cost), keeps our children close to home, and still allows students opportunities to partake in Magnet schools outside the assigned home school environment.

Make your voice heard! Sign this petition by noon on Tuesday October 28th. The petition will be presented at the public hearing at Garinger High School.

Support keeping our children close to home and relieving the current overcrowding in the Southwest area. Make CMS accountable for their motto: Every child. Every day. For a Better Tomorrow.

This petition will be sent to the following people:

Mrs. Thelma Byers-Bailey, Board of Education