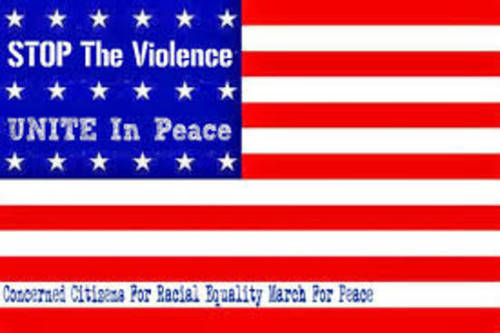 A solution to eradicate inequality

I have seen far too many active petitions naming the Black Lives Matter movement as a "hate organization" and comparing it to that of the KKK which is beyond devastating to say the least. This is not the case at all. The BLM movement was not formed out of spite. It was formed in order to bring about a change! It is based on a fight for the equality of the races which would not have needed to be created if we were not facing the problematic crises of which we are still facing today; Inequality amongst the races. With this being said, it is unacceptable for people to kill unjustly for the sole purpose of hate, ignorance, or revenge.

It is time for all of us as a whole, to take a stand and act on what is right rather than either turning your heads away or ranting about the issue without proposing a reasonable solution.

I have come to the conclusion that a non-violent act needs to be taken into play. For two wrongs most definitely do not make a right.

My solution is to firstly, start by creating this petition in order for the government to thoroughly investigate the backgrounds and secret lives of their hired and soon to be hired police officers in case they are affiliated with or bear the same ignorant mentality as those in the KKK. Also, to include in the theory aspect of training, the teaching of the principles of equality and eradicating the ignorant idea of black men being seen as threats, or else this will never end. It will only continue to be accepted and ignored because they were given improper training and undeserving authority by the law.

Additionally, this is a petition requesting for the law of gun control to be taken into play in order to terminate the occurrence of violence on both spectrums. I also go as far as stating that this petition is also for the government to put a thorough end to those in the KKK(because yes, it still exists) and license it as a crime for those of all skin colours to kill for the sole purpose of unjust hatred towards members of another race. Violence is never the solution, and the only way we can grow as a race of PEOPLE is to firstly, change our mentalities and literally, unite as one to spread love.

It takes that one little step of bearing the courage to evaluate yourself, and change for the good of the people as a whole. If racism cannot be put to an end due to the stubborn close-minded, spiteful mentality of many, we can at least fight for laws to be set in order to further eradicate this ignorance.

Thank you for reading and signing this petition to enable a change and truly allow love to be the winning factor in all our decisions.