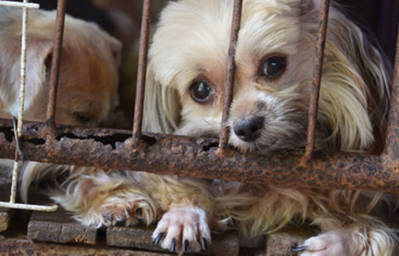 A product or a puppy:welcome to the life of a puppy mill puppy

I am here to talk one of the worlds worst problems. Dogs are man’s best friend right? Well if they are why are we still letting these places make tons of money every day? Puppy mills in the US alone have bred over 2 million dogs each year. And about 1.2 million of those dogs are euthanized in shelters every year. There are laws put in place to try and control the concerning rate that puppy mills are growing at, but these places have found out ways to go around these laws. Another huge thing wrong with puppy mills are the sanitary problems. Dogs are kept at the absolute worst conditions ever as this article by, Solotaroff Paul. "(2)The Dog Factory: Inside the Sickening World of Puppy Mills." states “Then we found the door that led to the basement. Down there, dozens of puppies in dust-cloaked cages stood on their hind legs and bawled. There were yorkies and poodles and Maltese mixes, but their fur was so matted and excrement-mottled it was hard to tell which from which. Bred for profit, most of them would have been sold in pet stores or on websites by their third or fourth month of life.” (3) See the photo on the left. .(4)"Even if the puppies survive this cruel torment they also have to endure the process of being shipped to the pet store or how the "Puppy Mills: Dogs Abused for the Pet Trade." PETA. N.p., n.d. Web. 19 May 2017. Said it “Young puppies who survive the unsanitary conditions at puppy mills and endure the grueling transport to pet stores have rarely received the kind of loving human contact that is necessary for them to become suitable companions. Breeders, brokers, and pet stores ensure maximum profits by not spending money for proper food, housing, or veterinary care."

Now I am going to talk about is one of the things that absolutely broke my heart is how dogs are smuggled across America, Mexico, and South Korea.(7) To illustrate “There is a network of breeders and smugglers who bring puppies into the U.S. from Mexico. While investigating what he called this “multi-million dollar industry,” Capt. Aaron Reyes of the Southeast Area Animal Control Authority reported finding “puppies stuffed in speaker boxes, screwed into the car door panels and wrapped in blankets with their little legs taped to their bodies and stuffed under seats.(8)”At Los Angeles International Airport, 30 puppies were found in a shipment from South Korea. Twenty either died or had to be euthanized after the arduous journey” Which is absolutely ridiculous that people are so money driven, that they can load 30 puppies into a crate and put them on a plane from South Korea to Los Angeles which by the way is about a 12 hour flight. They had no water or food for 12 hours. There has been laws put in too try and stop this but the laws are so vague that they seem to only apply to pet stores or breeders.

So if you want to help you don’t have to go out and try to find all the puppy mills out there yourself. That isn’t what I’m trying to make you do all I want you to do is is you want to adopt a dog or even a cat because these things happen to both. Instead of buying a dog of of the internet or a pet store go to your local animal shelter and adopt one, but if you don’t find your perfect match. At the least do your research about the place you plan on buying your dog from. But if you don’t want to buy a dog donate to one of these organizations trying to get more laws in place to limit or even stop them completely. So if you sign this petition you are putting yourself into something way bigger than yourself and giving an dog the voice it deservers!