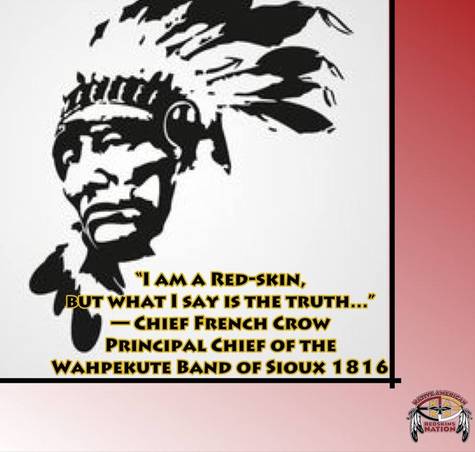 WHEREAS, we, the members of the Native American Guardians Association of the United States, invoking the divine blessing of the Creator upon our efforts and purposes, in order to preserve for this nation and our descendants the legacy history and proud traditions of native nations and our goal to educate minds and enlighten hearts in fostering a better and more thorough understanding of native people, our icons, our imagery and to preserve our cultural values by turning back the movement to eradicate our symbols in public and instead utilize them as a bridge to understanding do hereby establish and submit the following resolution; and

WHEREAS, the Native American Guardians Association (NAGA) was established in the wake of a wave of cultural damages and losses to Native American public imagery to become the most dedicated organization of American Indians whose goal it is to “Educate not Eradicate”; and

WHEREAS, many long-established and well respected logos, icons and symbols of our history, our tribes and our nations have been targets of unwarranted negativity, political “correctness” through legal and media campaigns designed to misinform which has resulted in extremely harmful cultural effects which, in a accumulative fashion, have negatively affected every area of our collective American and Native American life; and

WHEREAS, school boards, activist students looking to bolster their liberal college applications and for-profit corporations such as Adidas are all profiting off of these attacks and

WHEREAS, the political 'get out the vote' party leaders such as John Podesta and Stacy Abrhams of the Center for American Progress are (CAP) are dishonestly funding these campaigns with conjecture, debunked studies and outright lies as part of their goal of gaining an extra "14%" in the native vote to 'tip close elections' their way through 'empowering' name change campaigns which ultimately ruin communities and cause children anxiety, and

WHEREAS, these aforementioned groups are taking advantage of and even profiting handsomely off of the removal of native names and images through New York's native gaming industry leader Ray Halbritter who, together with non-native politicians and corporations, had previously simply paid off High Schools for changing their by championing a negative and dishonest history and then demanding legislation demanding the removal of other High School logos and names depicting our sacred names and symbols from public view and school use, and

WHEREAS, Ninety one percent of Native Americans polled via the Annenberg Public Policy Center in 2004 and again at 91% in 2016 via the Washington Post said that the name Redskins is not problematic while the more immediate surveys in these small towns and communities demonstrates a similar numerical strength of positive conviction; and

WHEREAS, Any name change defiles the honorable Lenape language itself where long-held self-describes variations of Redskin such as: òlàmàni - “Red Paint”; mèxkeòhkësit - “Red Skinned Person” or mèxkeòhkësichik as "Red Skinned People" or even the 1969 Sioux Sacred Pipe Ceremony which provided North Dakota it's Fighting Sioux name to last forever and

WHEREAS, that a substantial portion of activist school board members failed to attend to key educational and fact based messages, surveys, studies and findings in favor of keeping these names before voting to change the school’s names and monikers in line with the Center for American Progress, Adidas and NCAI's toxic talking points only; and

WHEREAS, the coveted Native American democratic debate and integrity principles of Gayanashagowa, known as the Great Law of Peace, dictate that any name change decision should be honestly vetted and debated with those it would impact as it will greatly diminish Native American’s public standing in removing the historic bridge to our unique and historically significant native founding fathers and their Red Painted and non-painted Warriors whose presence in the public sphere promotes educational engagement opportunities future for our tribal citizens and for all Americans at large.

NOW THEREFORE BE IT RESOLVED, that the NAGA and the undersigned hereby declares its continuing support for all citizens of America - whom have been identified by Harvard researchers in 2018 as collectively having more than half of its 330 million population carrying some native heritage & DNA - and the vast majority of 'rank and file' tribal persons who understand and are willing to fight against this corrupt yet well funded 'get out the vote' political movement in attempting to obliterate the cause of respectful and sensitive use of Native American logos and symbols in public - but only on non-reservation schools; and

BE IT FURTHER RESOLVED, we as a hybrid native nation are committed to promoting the principle of realistic yet positive Native American engagement with the public to include requiring any Native American themed school to require both local and national Native American history lessons so as to imbue into all students both pride in having the opportunity to represent this continent’s first citizens but a deep and pragmatic understanding of our culture, our philosophies and our legacy positive contributions in making the United States a better place for all peoples; and

BE IT FURTHER RESOLVED, that maintaining tribal nations’ legacies and robust public education via symbols, names and icons are inextricably linked, one cannot be truly achieved without the other; and

BE IT FURTHER RESOLVED, that NAGA and its affiliate groups will support the voting citizens and students and non-activist tribal members in not only turning back the insensitive, damaging and irresponsible assumption that native symbols are simply "mascots", and that most public native symbol and name displays at schools, at universities are being used objectively and specifically our honor our nation's historic native founding fathers and not the contemporary politically minded tribal activists. These names include the painted Redskins & Redmen & Red Raiders who are suddenly being re-defined and then attacked as subjectively "offensive", and

BE IT RESOLVED, that this national coalition will seek to enhance and bolster the status, legacy and cultural sensitivity of all schools in the United States lucky enough to feature positive public Native American symbol and name while seeking to develop new schools with similar names; and

BE IT FINALLY RESOLVED, that this resolution shall be the policy of NAGA until it is withdrawn or modified by subsequent resolution.