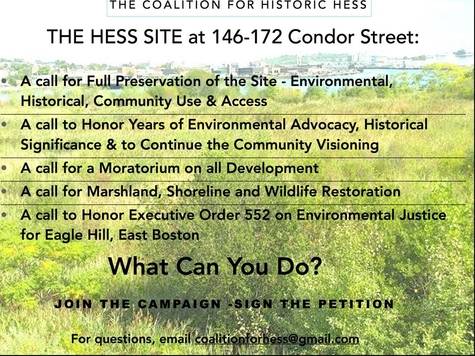 A Call for Preservation of the Hess Site in East Boston

What does the Coalition for Historic Hess Propose:

In 2007, without notice to CCAG or the community, the Boston Redevelopment Authority (BRA) buys the site for $1.9 million.

IN 2015, the BRA put out a bid for proposal for development. They received 4 proposals for commercial or marine industrial development. Neither of the 4 proposals take into consideration the historical significance of the Chelsea Creek, the years of environmental advocacy done by the community over a period of 20+ years nor the Executive Order for Environmental Justice #552.

Sign this petition and help us obtain full restoration of the Hess Site.

Here is a Fact Sheet that will help you understand the full history of the Hess Site.

An 8-acre parcel of land & tidelands on the Chelsea Creek situated along Condor Street and zoned as a DPA (Designated Port Area). The Amerada Hess Corporation owned the site as an oil storage facility from the 1970’s until 1998 when it was discovered by CCAG that it was contaminating the soil and Chelsea Creek. The site has an AUL (Activity & Use Limitation), has been partially remediated but still requires more remediation. The Hess site is currently owned by the Boston Redevelopment Authority. There are currently 4 proposals for development on the site being considered by the BRA. None of those proposals take into consideration the Chelsea Creek Community Vision nor equitable community engagement process.

1997 The Chelsea Creek Action Group (CCAG) starts a community input process for the redevelopment of the Urban Wild as well as advocates for the decommissioned tanks at the Hess site to be removed; In 1998 Hess Corp is ordered by MassDEP to remove the tanks; land remains contaminated

2001 Funded by the Hess Corp, CCAG conducts community vision & plan with support from Conservation Law Foundation. Vision called for site to be open space with cultural/recreational & commercial components. CCAG requests that site be donated by Hess to community. Hess does not donate site.

2005 Remediation is ordered by the MA Department of Environmental Protection on Hess site to ‘industrial’ standards, called an AUL (Activity & Use Limitation)

2006 An ExxonMobil Everett terminal spills 15,000 gallons of fuel into Mystic & Island End Rivers; In violation of the Clean Water Act, ExxonMobil signs reparation settlement of $6.1 million for contamination of the watershed of which $4.6 m is to be used for wetland restoration in area.

2007-2009 Without notice to the community & CCAG, the Boston Redevelopment Authority buys the land for $1.9 million and the land remains unused, degraded & undeveloped. There were talks of developing Hess for green energy projects. CCAG members testify in Federal Court helping to win a $5.6 million settlement form Exxon Mobil 2006 spill. CCAG asks for $1.5 million of settlement funds to restore the marshlands of the Hess site.

2015 The Mystic River Watershed Association and CCAG send in request as an alternative project to NAWCA for Mill Creek & Sales Creek. NAWCA rejects CCAG’s proposal but agrees with BRA to restore 2 parcels in East Boston along the Chelsea Creek not the Hess. In December, the BRA puts out a bid for development proposals which is currently open.

2016 Four developers propose commercial or marine industrial development for the Hess site to the BRA without acknowledgement of past environmental advocacy nor the community vision process of 2001-2004. One community meeting is conducted in English in July of 2016 which many Eagle Hill residents knew nothing about.