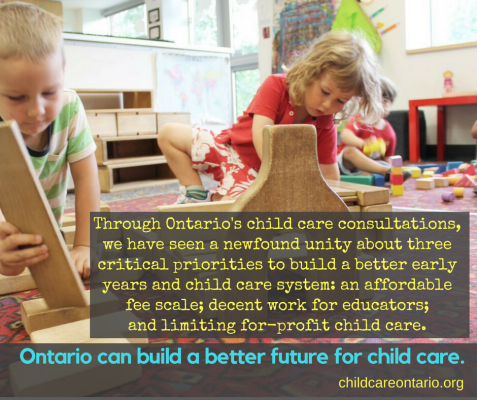 A Better Future For Childcare

A Petition to let the MPP of Burlington Eleanor McMahon and the Minister of Early Years and Childcare that child care is a very important subject that is a priority to Ontario Residents and needs to be a priority to the Provincial Government. By signing this Petition you are supporting the many families, children, Early Childhood Educators, and centres that all share the same goals of Ontario having Universal childcare. Sign the Petition to support universal childcare and the OCBCC's call to the Provincial government to support the creation of Universal childcare and a better future for Ontario.

Thank you for your time and support by signing the petition and helping build a better future for childcare in Ontario. You can tweet at the Minister for Early Years and Child Care at @MPPIndiraNH.