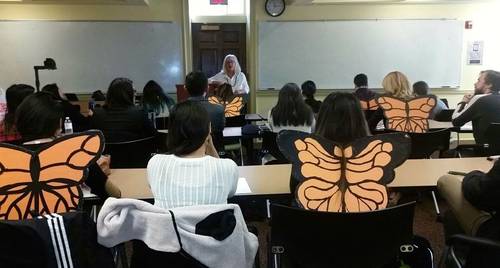 University of Georgia Against Segregation

379 people have signed this petition. Add your name now!

Freedom U Allies 0 Comments
379 people have signed. Add your voice!
22%

We, the students, faculty, staff, and alumni of the University of Georgia, oppose the University System of Georgia’s Board of Regents Policy 4.1.6 and Policy 4.3.4, banning undocumented students from our university and the other top four universities in the state, and denying them in-state tuition benefits at other USG institutions, respectively. The admissions ban at UGA has formally re-segregated higher education in Georgia for its fifth academic year. Banishing Georgia's high school graduates to separate and unequal educational facilities damages Georgia’s economic engine, squanders talent, and tarnishes our university’s and state’s reputations. The long-term economic and ethical costs of discrimination are immense. Georgia is missing out on an estimated $10 million in new tax revenue per year by disqualifying academically-eligible Georgians from discounted in-state tuition, and has failed to capitalize on the average $8,406 per year that is spent on a Georgia student’s K-12 education. Undocumented Georgians alone paid more than $352 million in state and local taxes in 2012; should they not be able to reap the rewards of their tax dollars? Please express your public opposition to the ban on undocumented Georgians and their exclusion from in-state tuition benefits, and use your power as the top official at our university to create positive change on our campus and in our state. Georgia must desegregate its universities by rescinding the admissions ban and charging undocumented graduates of Georgia high schools in-state tuition.