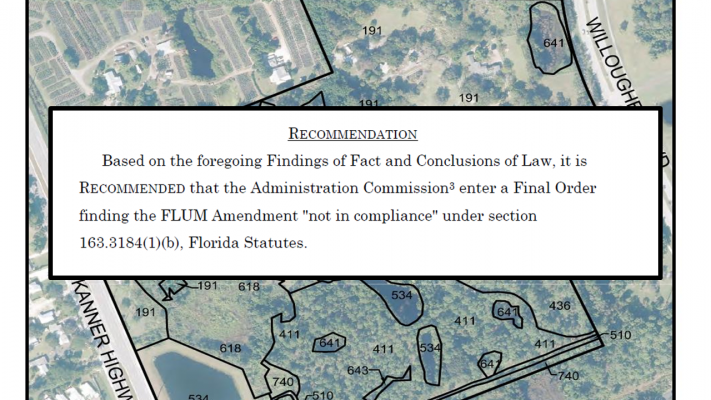 As you know, we filed a petition against the City of Stuart for its vote to approve the Ordinance No. 2466-2021, known as the Kanner CPUD.

The Administrative Law Judge, without question, ruled in our favor. She found, based on testimony and evidence as well as legal arguments presented during a multi-day hearing, that the ordinance adopted by the City Commission is not consistent with the City's Comprehensive Plan.

She stated that former staff members, including the former development director, failed to properly evaluate the application to establish the future land use designation for the Costco/apartments/retail project, and the designation that was subsequently approved is not consistent.

But what about Costco? Well, they and the developer failed to intervene in support of the application, leaving the City to defend an indefensible decision.

The City should withdraw its objections to the Recommended Order, which is pending before the Administration Commission, and repeal the adopted ordinance.

The City already changed how they review development applications. The Future Land Use and Zoning will no longer be reviewed as one application and ordinance. That's a win for residents!

If the applicant wishes to apply for a different land use designation, the process should commence with direction to the new development director and staff to ensure that the City's Comprehensive Plan is honored to protect residents and our community.