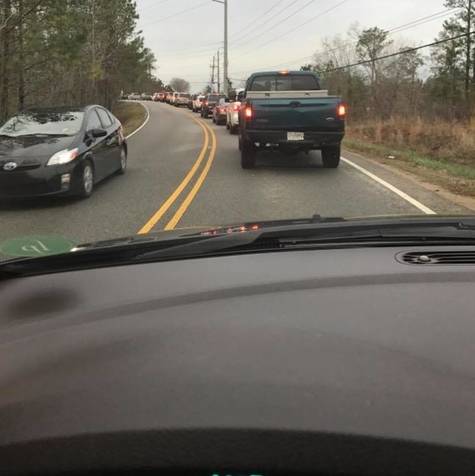 325 people have signed this petition. Add your name now!

To: Mayor and City Council of Vestavia Hills, AL

The Liberty Park development has added several new homes and new families to the eastern portion of the development, served primarily by Sicard Hollow Road. Home building in this area is continuing.

VH Elementary Liberty Park (VHELP) and Liberty Park Middle School (LPMS) are located adjacent to Liberty Parkway and Sicard Hollow Road, the intersection of which is now in the jurisdiction of Vestavia Hills.

Residents from the eastern portion of Liberty Park and those from Cahaba Heights whose children are zoned for LPMS use Sicard Hollow Road for carpool.

Sicard Hollow Road is a two lane road where carpool drivers wait for carpool twice a day, parked in both travel lanes approaching the Liberty Parkway intersection. The terrain and length of the carpool back-up prevents through-traffic from passing waiting cars safely. Despite passing blindly, through traffic will do so since road is blocked by waiting cars. This is a head-on collision hazard, both for those passing illegally as well as for vehicles turning from Liberty Parkway onto Sicard Hollow.

No alternative carpool wait routes have been designated by the city or the Board of Education.

The city has not scheduled expansion of Sicard Hollow road to accommodate carpool traffic, we understand, for lack of money allocated to such project. Liberty Park residents pay and have paid over many years city taxes that help fund city road maintenance and improvement. Liberty Park residents also pay fees to maintain the private roads within the private development so the city has not had the road costs associated a development that has been very valuable to the Vestavia Hills tax base.

Given the continued development of the Sicard Hollow corridor by both the City of Vestavia Hills and developers with approved development agreements with Vestavia Hills, Jefferson County and other municipalities, the undersigned do solemnly and urgently request two actions of the Vestavia Hills city council: first, that the city council provide funds for and implement a temporary traffic plan to reroute waiting carpool traffic to city-owned properties or streets (to SHAC field parking and/or the Lake Colony public street/parking area behind LPMS), with officers coordinating traffic flow to the schools such that Sicard Hollow remains open for safe passage of through traffic; and, second, provide adequate funding or funding mechanisms for and direction to undertake necessary and adequate road improvements / turn lanes to Sicard Hollow Road such that carpool traffic does not obstruct through traffic.

By signing this instrument, I agree that I have read, understood and agreed fully with the sentiments expressed herein and submit my signature in support with the intent that it be given the same effect as would my individual contact with the mayor and city council as to this topic.