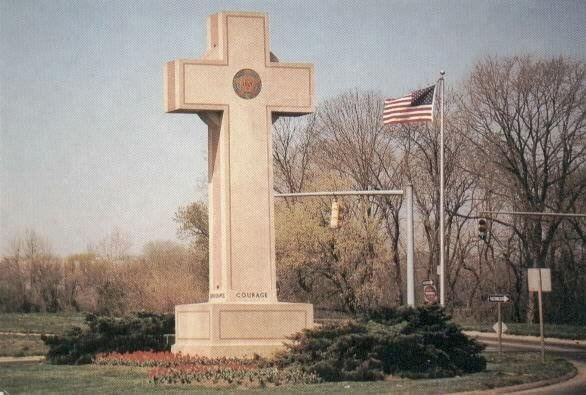 2822 people have signed this petition. Add your name now!

DONT let The American Humanist Association take this HISTORICAL piece of history away! - The Memorial Peace Cross is an area landmark that has become synonymous with the historic town of Bladensburg.

A District Court judge in 2015 declined to order the cross removed from public land, saying it is a historically significant secular war memorial and that the government agency had a nonreligious reason for maintaining it.

On October 18, 2017 A federal appeals court declared it unconstitutional. In a 2-1 ruling, the U.S. Court of Appeals for the 4th Circuit said the 40-foot-tall memorial maintained with thousands of dollars in public funds “has the primary effect of endorsing religion and excessively entangles the government in religion.”

We cannot let this happen. We must take this to the Supreme Court and have our voices heard by producing this petition to save our beloved War Memorial.

History of the War Memorial "The Peace Cross"

The Snyder-Farmer Post of the American Legion of Hyattsville erected the forty foot cross of cement and marble to recall the forty-nine men of Prince George’s County who died in World War I. The first enlisted man from Prince George’s to die in the line of duty (WWI) was George B. Farmer.

The cross was dedicated on July 13, 1925, by the American Legion. A bronze tablet at the base of the monument contains the unforgettable words of Woodrow Wilson: The right is more precious than the peace; we shall fight for the things we have always carried nearest our hearts; to such a task we dedicate ourselves. At the base of the monument are the words, Valor, Endurance, Courage, Devotion. At its heart, the cross bears a great gold star. The cross towers above the convergence of Baltimore Avenue, Bladensburg Road and Annapolis Rd. The Memorial is also situated near the WWII, Korean and Vietnam Memorials for those who gave the supreme sacrifice in Prince George’s County for our Country.

For 90 years The memorial has endured allot in it’s time including major floods from the nearby river. Due to it’s location at a major roadway junction, pollution and weather have shown some signs of wear to the Memorial. Fortunately, the memorial is maintained regularly and has had some major restoration and repair. The site is a major landmark in the Maryland, District of Columbia, Bladensburg basin. But most important of all, is the fact it’s memorializes those who made the supreme sacrifice in the Big One, (Over Thier) World War I. Let us not forget!

Sitting at the intersection of Bladensburg Road, Baltimore Avenue and the National Defense Highway just over the border into Prince George’s County is the Bladensburg Peace Cross, a forty-foot stone cross, notes those from Prince George’s county who fought and died in World War I. Inscribed with their names, and the quote from Woodrow Wilson, “The right is more precious than peace. We shall fight for the things we have always carried nearest our hearts. To such a task we dedicate our lives,” the monument is a towering landmark just outside the District.

The Bladensburg Peace Cross was erected by the citizens of Prince George’s County in 1922, and was dedicated on July 13th, 1923. Ceremonies were held at the cross, and with the assistance fo the American Legion of Bladensburg, Snyder-Farmer post, which included survivors of The Great War, Fourth Maryland regiment. Representative Stephen W. Gambrill of Maryland spoke, lauding the efforts and honoring the sacrifice of those who died, saying: “You men of Prince Georges county fought for the sacred right of all to live in peace and