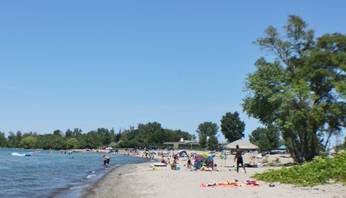 S.O.S. - Save Our Sunset Beach from Being Privatized!!

Oppose the privatization of your public beach!! Citizens of St. Catharines north south east and west, of Thorold and NOTL, in fact people across Niagara who believe public beaches belong to everyone!! A private organization wants to take Sunset Beach away from you. Niagara Rapids, a private pay to play volleyball league, has submitted a proposal to the City of St. Catharines asking council to carve off over half of YOUR beachfront access for 12 permanent volleyball courts...erecting a wooden Stonehenge in the middle of this tiny beach and ruining one of the most scenic unbroken views of the horizon in all of Niagara. Their goal, as stated in an email to their membership, states a desire not just to install volleyball nets for their use, but to "run a beach volleyball academy with beach camps, training and leagues," while hosting OVA tournaments at least three weekends every month all summer.

The waterfront is for EVERYONE, not just a private sports league. Volleyball is already represented there with two free courts; this group wants to privatize those and add 10 more, in essence monopolizing the beach for their use, their profit. Access to free and unfettered waterfront is YOUR inalienable right, a right too often taken from you by developers and private interests. The beach should be shared by all waterfront recreational endeavors, not monopolized by one private pay-to-pay group. Remember what happened to Port Dalhousie?? Fight the takeover and restriction of your public access to Lake Ontario beachfront! This group can invest monies raised through their registration fees and install sand courts anywhere. We support volleyball courts in city parks; leave the waterfront for the enjoyment of all! Join us in this S.O.S. -- SAVE OUR SUNSET BEACH! Sign this, and say "NO PRIVATIZATION OF SUNSET BEACH"!! (Once you sign, send an email to the City to oppose this proposal: contact Kristen Sullivan at ksullivan@stcatharines.ca.).