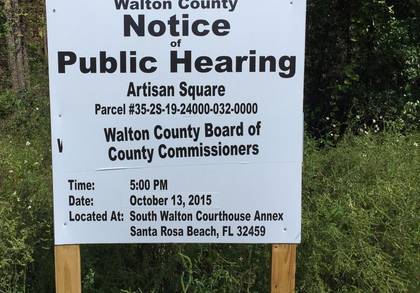 The Artisan Square Development proposed for Point Washington is on the agenda for Tuesday night's BCC meeting again. The Developer, Mr. Ono Horn, pulled it from the agenda last month after learning that the community was galvanizing against it. It is back on the agenda with no new changes to the proposed development. Mr. Horn is asking for 8 deviances from the Land Development Code in Point Washington. The proposed development would be on the corner of 395 and Eden Drive, and would include 5 residential lots and 15,456 square feet of commercial space including a restaurant. Last plan I saw had the restaurant at around 2,500 square feet. The deviances Mr. Horn is asking for from the Land Development Code include more than 2 times workplace uses, 2.5 times the commercial space, parallel parking along 395 and Eden drive, ingress and egress on both Eden drive and 395, reduced setbacks, reduced parking requirements, reduced green space requirements, and a deviance to allow special events.