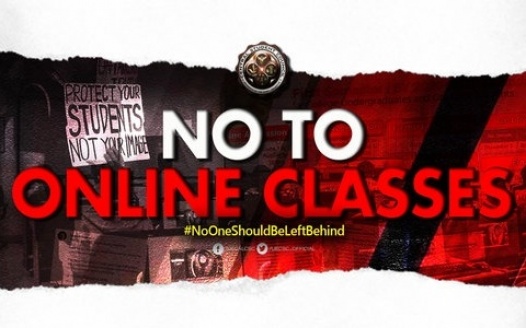 Not ready for classes to resume? Sign the petition now.

This is with respect to the decision of the university to commence the resumption of classes in the near future. Such plan has resulted in students and parents demanding the administration to take an alternative course of action instead. The aim is to respectfully convey, as raised by the community, the problems that may arise from allowing blended or online learning to push through.

The first issue that arises is financial security. It has been established repeatedly that the economic welfare of the population is still taking the negative impact. There are still a number of students with currently unpaid tuition fee balances. To start enrollment procedures during a state in which the citizens are generally struggling with their livelihood may not be in the best interests of society, for it may only serve to create a gap between students in terms of education. As of now, the financial welfare of the students’ families holds more value than the prospect of education in the time of a pandemic.

Some parents themselves disagree with allowing students to participate in blended learning or online learning. This is because in the case of blended learning, some would prefer to minimize the risk of infection by not having their children leave the safety of their own homes at all if not necessary. As for online learning, concern has been expressed over its effectiveness, especially when probable tuition fee rates are considered. A significant complication related to its questionable efficacy would be the implementation of classes for skill-based or studio-based courses that will be needing clinics, equipment, laboratories, and school facilities. It appears that the quality of education is likely to be compromised particularly when it comes to the demand of applied learning in such courses. Moreover, it should be mentioned again that not all students are privileged with the means to be able to participate in online classes with ease—a consistent issue regarding inclusive learning.

Another concern raised involves the survey on student readiness for flexible learning environment, the results of which have not been released yet despite the decision already made as to the beginning of enrollment. It should be noted that the purpose of such would be defeated without the much-needed transparency from the administration sought out by the students.

Lastly, the current condition of the community is simply not yet ideal for the reopening of classes. Structured and specific plans have yet to be imposed on the citizens for the people to have more confidence in the minimization of risks. The issues of transportation, mass testing, and flattening the curve all directly relate to the ability of the students to execute their duties safely and with little worry.

Although with good intention, the promise of education in a safe environment may be an idealistic one, for the situation may still be too difficult to even allow it. It is entirely possible, however, that there are students who are interested in continuing their studies and also have the means to comply with what is required. Be that as it may, the principle of inclusivity and education for all is a factor that should be considered to facilitate learning that is in line with fairness and equality. It may be best to wait for more official announcements from the government before any further action is taken by the administration in commencing blended or online learning.