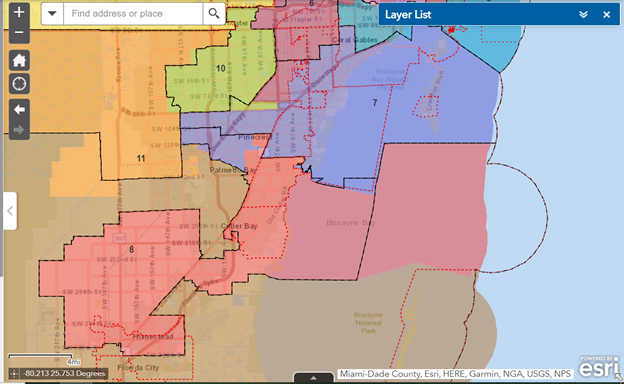 Having 2 district commissioners at the board of county commission will ensure residents voices are heard as it relates to traffic, development, zoning changes, and our property rights. Simply put, 2 voices are better than 1, especially when it relates to issues of future development of the South Dade Corridor.

What is going on, and what are Palmetto Bay residents proposing?

Miami-Dade County is in the process of updating the Commission District boundaries to comply with Board of County Commissioners (“Board”) Resolution No. R-511-04 and applicable federal, state and local redistricting requirements.

Every 10 years, after the U.S. Census is released, the Board adjusts the 13 district lines to better represent current and future population. It was no surprise that over the last 10 years District 8 had the largest growth in population within Miami-Dade County requiring changes to the current district lines. It also comes as no surprise that the largest area of expected growth over the next 10 years is going to come from South Miami Dade County.

Here is a link to the copy of the final proposal which will be presented for a vote by the Board of County Commissioners on 12/1/21. https://mdc.maps.arcgis.com/apps/webappviewer/index.html?id=54c70d23597f4795bf01055a5caafc39

We are proposing for a clean cut-off of the current proposed district 7 & 8 line. This cut-off would move the current dividing line from S.W. 136th Street south to within our municipality at S.W. 168th street. We are not alone in our understanding of the advantages that come from having multiple county commissioner’s representation. Other municipalities that have multiple commissioner representation at Miami Dade County include the City of Homestead, City of Coral Gables, City of Miami, City of Hialeah, City of Miami Beach, City of North Miami Beach, and the City of Opa Locka.