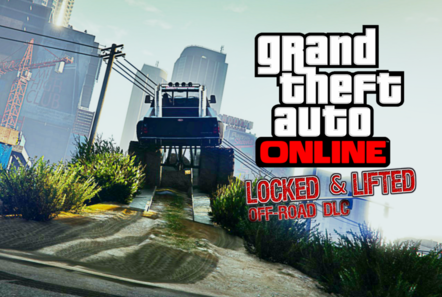 4282 people have signed this petition. Add your name now!

And check out the GTA FORUMS THREAD
http://gtaforums.com/topic/881118-locked-lifted-of...

Link to Our Facebook ideas page and discussion. Say what you want and discuss ideas.

The map of Los Santos is large and sprawling. While the bright lights of the city glimmer and shine. Nearly 90% of the remaining map is dirt, sand, rock mountains and hills. This Is our home.

This vibrant community prefers to spend it's time, on and in that dirt. Climbing mountains, crossing rivers, and crawling over rocks.

From our cliff tops, We have seen change. DLC content has be provided, for Gangs, Mafia groups, Bikers and Racers. It started with Lowriders, new missions and a new garage. With hydraulic mods the off-road community could only dream of. We wished the low rider and gangs community well, and adopted there Donk for our own off road needs.

The Bikers and Racers, launched their own campaigns with amazing results. And we again picked up on what enjoyed what others missed. While others spent there ill-gotten gains on super yachts and property. We revelled in the often missed brawler, contender and rumpo van, And the awesome trophy trucks. And adapted the massive array of stunt props, to create new and impossible trails. But the spark in the off road community was lit; we began to dream, and ask what would we want.

The release of the awesome wastelander and technical aqua, has only fanned the flames that a true Off-Road DLC is possible.

Locked and Lifted. The name reflects some key concepts for the DLC, as for the past few weeks we have been gathering ideas and concepts for the DLC which would represent what the hardened Off-rd Fanatics would like to see whilst appealing and fun for the entire Gta community. we hope to have come up with concepts which will satisfy everyone looking for simply Tough Trucks and Big Bucks, or maybe a little more.

take one modern Baller, rip out the fancy leather seats and sat nav, lift the suspension, bump up the BHP & add a supercharger. And you might just get the Doggstar.

The Sandking has dominated the terrain of Los Santos since the beginning. So Beekers garage took the Vapid classic, added duel wheels at the back and lifted that sunabitch so high you’re gonna need a stepladder to get in it.

when you’re stuck between a rock and a hard place, and you just can’t get out. Never fear the Vapid VTTT is here. A modified trophy truck chassis. Fitted with the classic tow truck van body and working Tow hook. If either going to pull you free or apart.

back in biblical times, Jesus spent 40 days and 40 nights in the desert if he would of had a Bf Baja, he would of only needs 2 hrs to find what he needed. Fast and fun baja inspired buggy, choose from one of the many livery and body designs available. The same base buggy but personalized to your taste

@ Beekers off-rd shop Beekers is the one stop shop for your off-rd Conversions and upgrades. For quick customization and mods visit the shop in Paleto Bay. Or for a full transformation and conversions stop by our recently acquired hanger in GrapeSeed. We don't d credit but will accept blow jobs and beer.

Trophy Truck upgrade: We cut your favorite vehicle to pieces, at your expense. All our expert mechanics are all on holiday so, Billy Bob the beer boy will then weld your what’s left of your car or trucks body onto to a previously written off trophy truck frame. Your Safety is paramount, so if you are fatally injured in the first week of use we will give you your money back.

Working Winch: latch on to other vehicles at short range. Because sometimes we are all in need of a quick tug. (If you destroy your vehicle in water you have a limited time to restart the engine, get it back above the water line)

Snorkel: it lasts 5 seconds longer than usual, that's all we get, in the rivers and surrounding sea. Fit the Beekers' snorkel, its won’t increase the length of your penis but it will increase the depth and duration your truck can travel through water.

hydraulic kits: We stole a Low Rider, and modified the ,hydraulics to work in your favourite SUV and Off-Rd vehicle. Struggling for clearance over rocks ? Want increased balance on a traverse? Hit the hydraulic Lift and Independently control you shock.

Bigger Wheels and New Designs: Want and need more traction, fit a set of the Beekers off road specials. Greater traction on the on gravel, grass and blood stained roads. All our tires are made from recycled condoms. Add these to a new selection of huge off-road complete with a new range of camo painted rims.

Low Ratio Transmission: don't care about top speed ? this tranny will reduce our top speed, but enable greater traction and provide you with more vehicle control.

Off-Rd Exterior and Trim: roof bars, shovel, tracks, kayak, guitar, tent, Petrol cans. You will probably never use it on a trip down Vinewood boulevard. But to show you’re a real man you need to stick it all on the side and top of your Truck right now.

Using an array of new special vehicles, including the Duke of Death Trophy truck, and Military, off road big rig. Recover Cargo from remote, plane crashes and ship wreaks. There are no roads to these spots. And expect don't expect a free ride, the bikers and mountain police are gonna give chase on dirt bikes.

recover, off road and suv vehicles for your warehouse. Don't expect them to be parked up on Vinewood Boulvard. Your gonna have to look a little father and higher in the Tataviamvan Mountains, Chiliad Mountain Wilderness, and Raton Canyon.

Find one of the Custom Trailers around the Map you hook up and visit one of the Animal Hunting reserves (several around the map) where you hunt animals for points in online hunting missions. With a time and ammo limit, and (animals only spawn for limited time when your in a reserve) . Low points scored for small birds and rodents, more points for larger animal such as bucks and wild cats. Watch out though as the Hunter may be come the hunted. As several of the park rangers have reports of UFO and Bigfoot sightings in recent weeks.

The concept of rallying, hill climbs and sprints, involves posting a faster time than your competitors. You don't compete for position on the track, there is no excuses here just you against the clock, Attempting to post a faster time than the man next to you. One attempt all the pressure on one run.

example of the Start line and Course [spoiler]

Multi player time trial lobby's allows you to build a course/track/stage, A service area winners podium and hospitality. Using the creator props. This could be a rally event, drag race, or simply a car meet. The possibilities are endless

Bring multiple cars to the location with unique vehicle transportation, planes, trailers and trucks. Set a time on the Track or course, the host determines how many attempts you have (hit start to view the leader board and times)

This is a sandbox concept and no guns are allowed in the lobby and no money is won, or exchanged, its done for the competition.

We have seen a large amount of stunt props added to the game. However many of the props are only for track racing. Off Rd Trails and Races are popular with the GTA Community.

The Added off road Stunt props of this DLC, will see the addition to change the surface of track sections to, mud Grass or loose rock. In addition there will; be mud bog or water splash, track section.

The rock formations will be added to enhance the natural paths and create more paths around the map. Or create custom rock crawls or trails with the new rock formations. Additional fallen trees new log piles and the ability to build Sand dunes. Trail obstacles such as sea saws and balance bars, or deforming collapsing bridges to make river crossing great hazards.

The Added Creator update will benefit, not only the off-rd and racing players, but the entire GTA community, allow us just to build authentic, realistic and aesthetically pleasing experiences in the world of GTA.

Thanks to the moders and there mods who made this possible

All others mods can be found on www.gta5-mods.com

Thanks For the 100’s of messages, ideas and advice from the GTA Off-road Community on facebook, www.gtaforums .com and twitter.

Thanks again to the Off-Road All-Stars Crew Members for the support advice and Motivation. www.facebook.com/groups/offroadallstars

Thanks to GTA Wise Guy, creator of the Tuners and Outlaws DLC Trailer for the inspiration. If you want to see how how a dlc trailer should be done. [/spoiler]