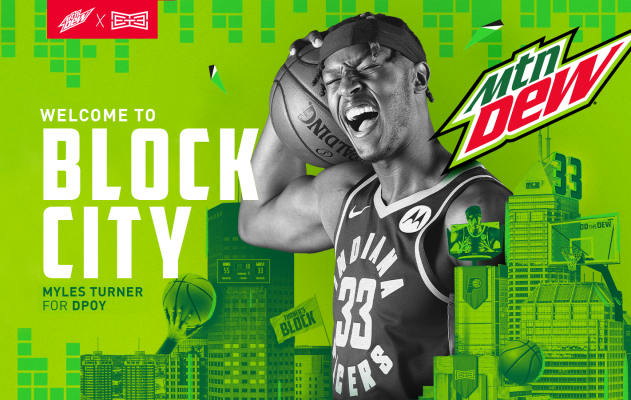 For the last six years, our guy Myles Turner has been crashing boards, breaking up plays and flat-out balling as the defensive anchor for the Indiana Pacers.

With an average of 3.4 blocks per game – an Indiana Pacers Franchise record, contesting the most shots at the rim – 13.2 rim contests out of 100, and averaging 0.9 steals, Turner’s not just the best defender on the court this season – he's single-handedly turned the city of Indianapolis into “Block City,” hosting nightly highlight reel block parties against the best the NBA has to offer. But despite his historic on-court performances, he still isn’t getting the recognition for 2021 NBA Defensive Player of the Year (DPOY) he deserves. That’s why we need your help.

We say, it’s time to call the shots in support of Turner’s DPOY campaign. We, MTN DEW, DEW Nation, the Indiana Pacers and the fans, are formally petitioning Mayor Hogsett and the city of Indianapolis to throw the full support of the community behind Myles and lift him above his DPOY peers by:

Renaming the City of Indianapolis “Block City” for a day, in Turner’s honor

Nobody balls for that block like Turner, so please sign and share this petition to help us seal the deal and spread the word. Together, let’s make “Block City” a reality and show Myles Turner some hometown love when you help us charge his campaign for the 2021 NBA Defensive Player of the Year.