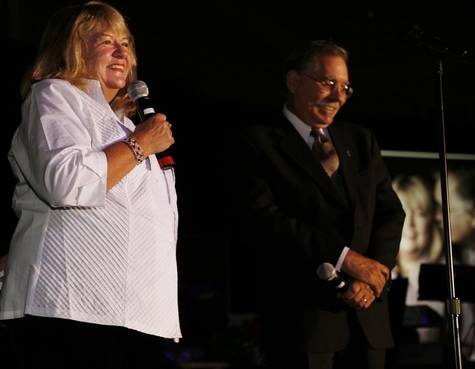 Update: August 19th 2017. Thank you to everyone who added their endorsement to this petition to recommend Pat and Lamar Marchese as CCSD School namesakes. We have been notified that they are among the 15 finalists under consideration for the 5 elementary schools to be named for 2018. At this time we'd very much like to hear from you if you personally benefited from the arts and after-school programs that begun in the 80s and '90s under Pat's leadership. If that's you, please email MarcheseSchool@nevadapublicradio.org

The naming committee meets on September 11th for the next step in the evaluation process.

Pat and Lamar Marchese devoted their professional lives to life long learning and cultural opportunity for all in Southern Nevada. We the undersigned support their nomination to the CCSD School Naming Committee for consideration as a namesake in May 2017.One of the highest honors bestowed upon an individual who has made an everlasting impact in the Clark County community is to become a school namesake. The motivation for this naming opportunity is to honor educators, students, and community leaders of the highest character, while providing Clark County school children with role models, and a sense of the rich history and diversity of the Southern Nevada community.

Retired in 2007 as Director of Clark County Parks and Recreation:

Lifetime Achievement 2006 from the American Society for Public Administration

As Deputy and then Director, developed and oversaw the masterplan for 2000-2020 to develop urban and rural parks and recreational facilities to meet the needs of a rapidly growing county.

Convened volunteers in 1970s to secure the first public radio license in Southern Nevada. 1975 Nevada Public Radio Incorporated and signed on in March 1980

Lamar grew NVPR from a grassroots style community radio station into an extensive network anchored by the first NPR affiliate in the region, expanding to Tonopah, Panaca, Ely, Elko, St George and parts of California and Arizona, the locally produced jazz show “Four Queens Jazz night” ran for 19 seasons in national syndication through Public Radio International on dozens of NPR stations. In 1997 grant funds from the Donald W Reynolds Foundation secured a permanent home for NVPR on the CSN campus. In 2003 KNPR divided into two full time FM stations creating all-news and all-classical services. Simultaneously established KNPR’s State of Nevada the talk program that earned the largest ever CPB grant for a non-national program. Hosted NPR’s Talk of the Nation to celebrate LV Centennial. Lamar Retired in April 2007 with the annual operating budget at $3.5million and an impeccable track record of compliance and stewardship of donor funds. Lamar served six years on the NPR National board of Directors.