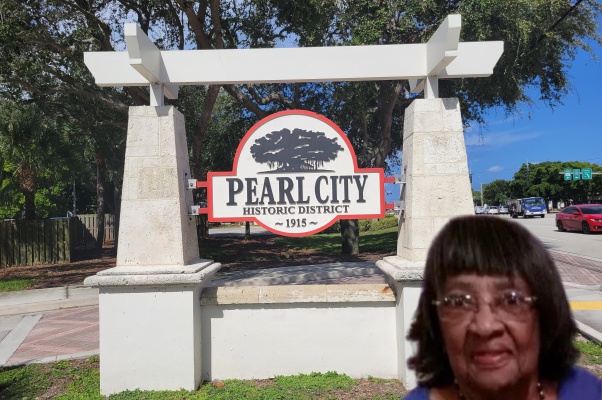 Did you know Pearl City, Boca Raton’s Historic Black neighborhood was split in two by the extension of Glades Road in 1978?

In 1915, Pearl City was established for African American residents south of what is today Glades Road between Dixie and Federal Highway so that workers on local farms did not have to make the long walk from Deerfield Beach. Eventually, the community spread beyond the original three-block area near Federal Highway and Glades Road to include about another eight blocks to the north. Pearl City grew to be an independent community with its own churches, businesses, school, and entertainments in the days of segregation.

In 1978, the Florida Department of Transportation, FDOT, extended Glades Road from Dixie Highway to Federal which ran directly through Pearl City causing the community to split into two.

Mrs. Martin boldly objected to this divide and also to the removal of a massive banyan tree “aka” in the community as “The Tree of Knowledge” which is currently located at the corner of Old Dixie Highway and Glades Road.

Educator and community leader Lois Martin was born on September 23, 1928, in Boca Raton, Florida to Sallie and Jasper Dolphus, the first minister of Ebenezer Baptist Church. After graduating in 1946 from Carver High School in Delray Beach, she earned an A.A. degree in 1948 from Florida Normal College and B.S. degree from Florida A&M College in 1950 before beginning to pursue graduate studies at Boston College. In addition to her career as an educator, Mrs. Martin had always been an active member of her community.

Ms. Martin acted as secretary to the Parks and Recreation Advisory Board and later served as vice chairman for the Housing Authority. She was a contributor to Habitat for Humanity, sat on Boca Raton’s Historic Preservation Board, held the offices of vice chairman of the Pearl City Blue Ribbon Committee and treasurer for the Martin Luther King Memorial Committee.

In addition, she served as a Sunday School teacher and treasurer for the Ebenezer Baptist Church. The Lois Martin Community Center, named in her honor, serves the underprivileged communities of Boca Raton with a variety of services for children and teens, including tutoring and after school program

D.I.S.C.
Developing Interracial Social Change, (https://www.discofpearlcity.org), an organization that works to bridge racial and economic gaps in the community, are in the process of obtaining a national historic district designation within the National Trust for Historic Preservation.