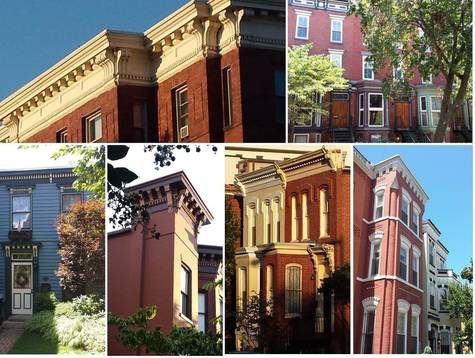 The residential blocks of 10th Street NW between Rhode Island Avenue and the downtown commercial district in Washington, DC-- which are adjacent to historic Blagden Alley and Naylor Court -- constitute a well-preserved residential enclave built primarily in the late 1800s and early 1900s. This section of the Shaw Historic District, bounded by the commercial corridors of 9th and 11th Streets NW, is unique in its purely residential character and in its preservation of so many stately, as well as modest, residences from that time period.

Many of these homes were rescued from the brink of destruction in the 1970s and 1980s from intentional razing for “redevelopment” as well as from deterioration which, in some cases, led to collapse. Many of the pioneers of this neighborhood’s resurgence remain in the community and are valued contributors to the fabric of this established historic district.

Developers of the final few vacant lots in this neighborhood have stated that national preservation guidelines for historic neighborhoods support designing infill structures that are out-of-character with the surrounding structures. However, other interpretations of these guidelines (see Sense of Place: Design Guidelines for New Construction in Historic Districts, Preservation Alliance for Greater Philadelphia, 2007) have expressed support for more compatible approaches, stating:

“…the fundamental interests of preservation can only be served if compatibility is given greater weight [than differentiation], since it alone allows us to sustain valued historic character in the face of the many forces threatening it. To insist on differentiation by means of a contrasting modernist style for new construction, as some authorities have in recent years, condemns historic buildings and districts to change in ways alien to their historic patterns and typologies. When consistently applied, this policy leads to the gradual erosion of historic character as the inevitable consequence of the preservation effort itself—an unacceptable contradiction in contemporary preservation practice.” (p. 9)

We, the undersigned neighbors of the 1200-1500 blocks of 10th Street NW, support designs for infill structures in our historic residential neighborhood that are reflective of the established architecture in size, design, materials, detail, and style, and oppose the construction of new structures that have been designed in stark contrast to the vernacular neighborhood architecture. As such, we demand that the DC government institute and/or implement all policies and approaches necessary to prevent the further degradation of the historic fabric of this residential neighborhood.

Please sign with your name and address. Thank you!