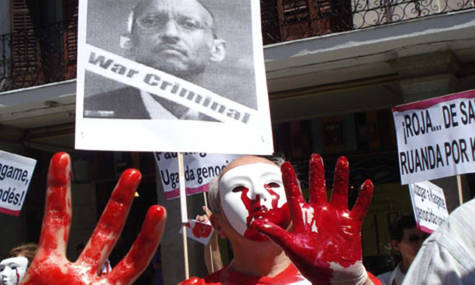 Say NO to Paul Kagame attending the Champions of Jewish values Gala!

We, the undersigned, wish to state our objections to the invitation to Paul Kagame to the “Champions of Jewish Values” International Awards Gala on May 21st, 2017.

No matter how one may view the Genocide of 1994, the intervening years have seen not only the killing of hundreds of thousands of Rwandan refugees in the Democratic Republic of Congo by Rwandan forces (as revealed in the UN Mapping Report) but also an increasing number of political imprisonments and killings by President Kagame’s government. (Please see the US state department reports since 1996)

There have been arrests and killings of political opponents, killings of his former bodyguards and high ranking business people since 1994. President Kagame’s support for militias in D.R. of Congo, as revealed by the United Nations, has lead to an on going conflict of rape, murder and economic exploitation that has killed millions and destroyed the lives of far more.

As human beings, we cannot both applaud peace and support someone who has promoted bloodshed and cruelty as a methodology to rule. Jewish values are human values. We all want peace, we all want the TRUTH.

It is events like the one you are holding that hides the acts above behind a curtain of President Kagame being a savior. We hope you will see that you are being used to his end and wish you would seriously question your decision to invite Paul Kagame to this event and, worse, to possibly award him some sort of “prize”.

“There may be times when we are powerless to prevent injustice, but there must never be a time when we fail to protest.”