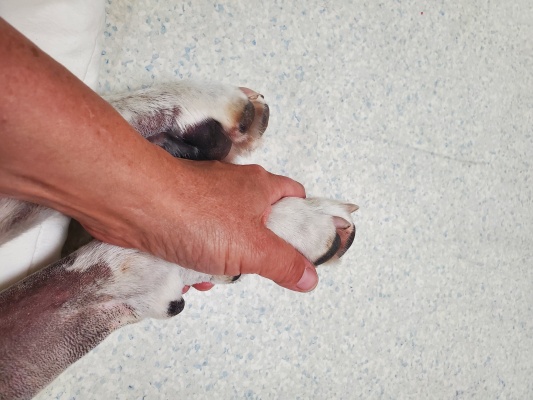 I took my dog to VREC (veterinarian referral clinic in Clark Summit.) He was admitted because of bite wounds from another dog. The clinic put just ONE staple in his main wound under his front left leg. And two staples in his neck. That were hanging out, by the way. By the time we got home the main one was bleeding profusely. So we turned around and went right back up. I have pictures that are of the bleeding on the way back up to VREC Clark Summit the second time. If I'm allowed to post. they are graphic. And pictures at Lehigh Valley Central, showing the blood in his legs. When I called VREC to ask them if that was normal procedure to just put one staple in a large wound they said, sometimes. I asked them if it was also normal procedure to stitch the wound for a dog bite and they said yes. However they did not do that.
When he was admitted the second time on 9/21/2020 proximately 45 to to an hour later because it takes us 30 minutes to get there, they suggested that he stay overnight because there may have been something that they missed and the wound may have been deeper. The blood from under his left arm was actually squirting out. Possible severed vessel or Brachial artery.
The next morning when we called to check on him all they could tell us was he was resting comfortably. I proceeded to ask if he was still bleeding. The receptionist answer me she did not know. That point I became concerned and called my regular vet to get him to better care and a second opinion. When we arrived to pick up Blu, he was unresponsive, neurological. Eyes was were fixed, whimpering in pain. Limbs were purple and rigid. Edema and necrosis setting in, still bleeding from the main wound under his arm. He also had no blood pressure.
I can’t wrap my head around why they didn't do emergency surgery. Or at the very least put a drain in so infection wouldn’t set in.

Our regular vet was concerned that he needed drain put in that he did not have so he referred us to Lehigh Valley, valley central animal emergency.
(Under the second discharge instructions it states his Musculoskeletal and Neurological that he had no lameness or neurological issues. THIS IS NOT CORRECT IN ANY WAY!!!!
He was completely unresponsive, neurological. Eyes were fixed teeth were clenched to the point I couldn't open his mouth, and in very much pain. They had to gurney him out to us. There was No discussion on VREC’s part whether it was safer for him to have stay there and not be moved. Or to have him go somewhere else. There was no conversation at all. At that point I believe they had messed up and wanted to get rid of him and not take responsibility.) When I talked to Jen Smith, the client service manager later on a phone conversation, she said they had been discussing a surgery schedule for that morning. I don't know how they could have done surgery on him since he was so neurological. They would've killed him with the anesthesia. Like I said his eyes were fixed. They were bouncing a little bit like vestibular.

We Transported Blu to Lehigh Valley Central. Again i have pictures of our transport where you can see the purple limbs in his state of non-ambulatory. You can see part of his purple leg in the main picture above.

The doctors at Lehigh Valley Central said he was in septic shock. For how long we don't know. But for sure when we picked him up from VREC Clark Summit he was purple . Limbs filled with blood . How do they did not notice that his limbs are purple Is beyond me. And Signs of septic shock. And still bleeding ! Later in my conversation with Jen Smith, told me that Lehigh told her that it was not definite that he had septic shock. LIE ! I have the discharge instructions from Lehigh stating that he was in septic shock and and had a serious infection. That is the reason why we put him to sleep! He was in severe pain from the septic shock.

Blu as a pre-existing condition of Wobblers disease. I told VREC that he was on a steroid. They have his history there, they know this, and I also told them when he was being admitted .And they were not supposed to give him any anti-inflammatories. But they did give him carprofen, not good !
VREC on duty veterinarians are unresponsive to me trying to get in touch with them to get any information. I did talk to a client service specialist who said the doctor was supposed to call me and never did. All I want is answers. This is heartbreaking.
I am shattered. We had to put Blue to sleep. at Lehigh valley central, they said he had a grim outlook. He was in too much pain and I didn't want him to suffer.
Not the first issue I've had with them. But this is the most serious.
There needs to be awareness and total responsibilities for animals that are suffering under their care.

VREC needs to be held accountable.!!!!!