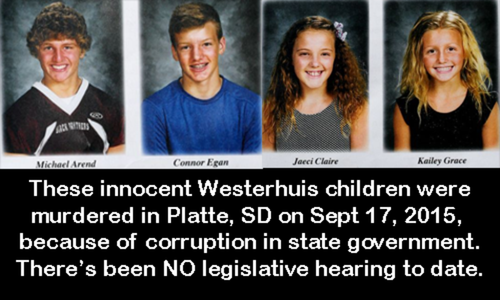 On September 17th, 2015, South Dakotans awoke to horrific news stories of the entire 6-member Westerhuis family discovered dead in their burnt out home in Platte, brutally killed by shotgun blasts.

News reports have confirmed these deaths are at the center of acknowledged corruption in the mismanagement and misuse of taxpayer monies given out in grants by the SD Department of Education. Reports are that Department of Education administrators have known for years that these taxpayer monies were not being handled properly by its contracted agent MidCentral Education Cooperative. News reports identified former and current public education officials as having received large amounts of taxpayer monies via these programs administered by MidCentral Education Cooperative; however, these programs cannot identify any Native American children who benefited from these monies specifically designated for these needy youth.

South Dakota statutory law, 2-6-2. Empowers the Government Operations and Audit Committee (GOAC) to inquire and review "any phase of the operations and the fiscal affairs of any department, institution, board, or agency of the state.." With the ability under 2-6-4. to "examine all records and vouchers, summon witnesses, and thoroughly examine all expenditures and the general management of each department."