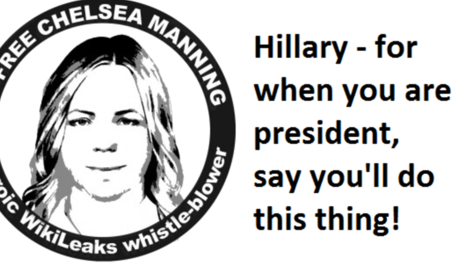 As US President, make your first act the release of Chelsea Manning. She is doing 35 years in Fort Levenworth, Kansas, for exposing cowboy killings by US troops of innocent people and journalists from a helicopter gunship- and a host of other US abuses and suspected war crimes committed against Iraqi and Afghan people. She deserves to be celebrated as a hero for helping get your troops out of those places. Yet she languishes in an army prison. You may know her better as Bradley Manning. The US Army permit no photographs - or to let her even use a word processor - so when her best friend read her acceptance speech when she won the Inaugural Blueprint Whistleblowing Award for Enduring Impact at Thomson Reuters in London on the 9th May, no pictures were shown and he could only recount words dictated by Chelsea down the phone. Chelsea suffers in a US army jail with few books and must be freed.

Chelsea has been forgotten about since her cell door clanged shut and her sex-change plans made public. Show your commitment to fair play and open government. You have recently beaten Bernie Sanders for the nomination and both you and I know that Bernie would also release Chelsea, if he could. You need to show now that you are better than Trump.

Please help underline the contribution whistleblowers make to society by releasing Chelsea, who only did what you or I would have done, when confronted by the slaughter of innocents. For this is how all humans should act. And by promising to release Chelsea, show the world you would never tolerate US forces repeating those excesses against arab people again.

35 years is a vicious and unreasonable punishment for someone who risked their own life, freedom and future to save others. Hillary- redress this act as soon as you take office, and give the US back its dignity and respect. Promise to release Chelsea come January 2017.

Pete Gregson and everyone else who signs this petition

Why might the US might listen to the Scots on the topic of human rights? Well, the US Consul gives some reasons HERE

Read more about this petition at Kids not Suits website HERE

The first protest about Chelsea's incarceration when the first tranche of names was delivered to the US Consulate in Edinburgh on 21st May.See the video of first petition delivery to US Consul here https://youtu.be/SOQ_Z1pwqJk HERE

The next one will be in January 2017, before Hillary is crowned queen of the US of the 20th. We will hand in a tranche of names, at each we will seek media coverage. Hopefully we will gather celebrities along the way to help boost the campaign and her more signatures. If you want to help, contact Pete HERE .

The idea is to use the press to get interest in the petition. What we delivered that Saturday was a work in progress. Cos all signatures are on-line, Pete explained to Hillary in a covering note that the petition would be open until she is sworn in as president in January 2017. That way she can keep track of everyone in the world who believe she needs to act. Obama should note as well, that as President, he can let Chelsea out tomorrow- and spare Hillary's blushes.

"We leave unmolested those who set the fire to the house, and prosecute those who sound the alarm." Nicolas Chamfort 1741-94

This petition will be delivered to: