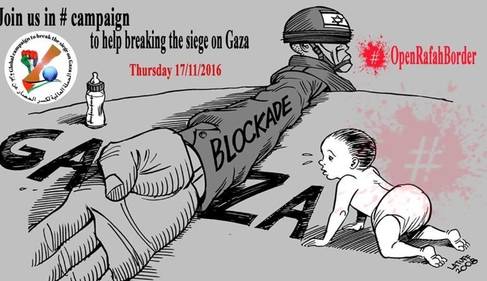 The Global campaign to end the siege of Gaza Gaza 0

PETITION TO END THE GAZA BLOCKADE

The Global campaign to end the siege of Gaza Gaza 0 Comments
158 people have signed. Add your voice!
2%

A Decade Under Siege: The Global campaign

to end the siege of Gaza

PETITION TO END THE GAZA BLOCKADE

We, the undersigned, implore the EU to bring about an end to Israel’s illegal blockade of the Gaza Strip.

The decade long siege continues to cause far‐reaching devastation and unnecessary suffering. The blockade has left 70% of Gaza’s 1.9 million citizens dependent
on international assistance, and 47% of households are designated as food insecure.

The UN Secretary General, Ban Ki‐moon, recently condemned the blockade as a “collective punishment for which there must be accountability.” Similar remarks
were made in 2012 by the UN Under‐Secretary General for Humanitarian Affairs, who referred to the blockade as “a denial of basic human rights in contravention of international law." It is completely unacceptable that this situation has been permitted to continue for ten years.

The restrictions on the movement of goods and people have stifled Palestinian livelihoods, and put immense strain on the coastal region’s infrastructure. Israel’s repeated military operations have exacerbated an already fragile situation to breaking point. During July and August 2014, Gaza experienced the most devastating round of hostilities since the beginning of the Israeli occupation in 1967. The UN recorded 2,205 Palestinian fatalities, of which 67% were civilians. Reconstruction efforts have been largely hampered by the blockade, and 65,000 people remain internally displaced.


Shortages in electricity and clean water have led to severe health and sanitation problems, and less than 5% of Gaza’s water supply is considered safe for human consumption.

Short‐term solutions to the manmade crisis in Gaza are not sustainable. It is in the EU's interest to see Gaza stable and flourishing, but this can only happen when the blockade ends.

In this regard, we call upon the EU to:

– Demand that Israel fully ends the blockade imposed on Gaza.
– Ensure Israel complies with international law and its obligations as an occupying power.
– Pursue accountability for all violations of international law, particularly in regards to military actions.
– Demand that Israel abides by previous agreements, including those of the Oslo Accords.
– Support efforts to unify Palestinian political factions.
– Call upon international donors to honor the monetary pledges made to rebuild Gaza.


The Global campaign to end the siege of Gaza