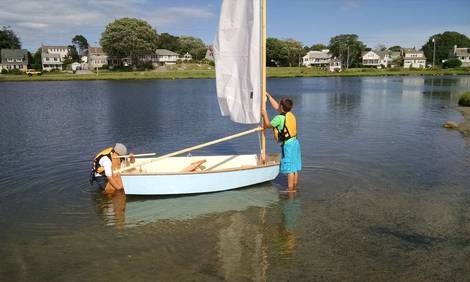 Halt the Phase-Out of the GLP Sea Shell Fleet

On November 20, 2015, the GLPYC Board announced that they had voted to replace the existing fleet of Sea Shells with Optimists (Optis), and that the transition was to start taking place this coming summer. The Board said it had purchased 10 new Optis for use in the fleet this summer.

After receiving much feedback from the community, the GLPYC Board made a second announcement (via email on December 10) that they would modify the plan. They stated that they would not eliminate the Sea Shell fleet as previously stated, but would introduce the 10 new Optis to the fleet as a “pilot program.”

The Board also said that they would host an open meeting for members to offer feedback about the new Opti program on January 9, at 9:30AM.

However, the Board’s response is inadequate, and the process by which this decision has been made is very troubling. In particular, there are several major concerns that the Board has failed to address:

1. The Board did not include GLP community members—or even yacht club members—in their decision. Even after receiving much negative feedback to their plan, they still have not opened the process to a vote.

2. GLP is largely a summer community, but the Board set a date for discussion of the issue in the middle of winter (Jan. 9), when few yacht club members are around.

3. The Jan. 9 meeting still does not allow for a membership vote; only for a solicitation of “feedback.”

4. In their most recent announcement, the Board states: “While adding Optis may have seemed a surprise to some, it is a result of a considerable amount of research by the board, including discussions with community members, surveys of national and area clubs (almost all of which had made similar transitions over the years), and research into appropriate boats.” Their decision was a surprise because the Board has never shared any of this information with the membership. In the most recent membership meeting in August, 2015, there was no mention of any plan to transition to Optis. Further, there was no systematic polling of yacht club members (beyond “casual conversations with parents and grandparents” mentioned in their Nov 20 email).

5. The Board continues to bring up safety as a reason to replace Sea Shells with Optis. However, there are no reasons why an Opti is safer than a Sea Shell—except that the Optis will be new. Optis are made of fiberglass and are much less durable than wooden Sea Shells (some of which are 50 years old!), and are more complicated to repair. The weaker fiberglass Optis are not supposed to be dragged on the beach and will deteriorate under these conditions. Most clubs store their Optis on racks and use dollies (small trailers) to move them down into the water. None of these issues has been addressed. Based on the recent feedback, the Board has agreed to implement a safety inspection of Sea Shells for the first time ever; they should allow one summer season to see if this inspection allows for safer boats before adding Optis.

6. The Board states, “We also recognize that adding Optis will require additional training for the inner lagoon staff…” Mixing the fleet with different boats will add extra stress and complications for our young junior sailing staff. Optis have a very different system of rigging (including taking the mast home with you every day), and will need to be scored differently during races. The Board does not say how or when that training will happen, or how these complications will be addressed so that our young staff is not overwhelmed.

7. The beach at the inner lagoon is already overcrowded with Sea Shells (many of which float away at high tide). The Board fails to address how 10 new boats—requiring the mast to be inserted and taken down each day—will fit on the beach.

Unlike many other yacht clubs, where the fleet is owned and maintained by the club itself, the GLPYC Sea Shell fleet is a thriving fleet of more than 34 boats, owned by individual community members. The yacht club has no right to decide the fate of this fleet without a deliberate and transparent process that seeks the input of these owners and offers the chance for a membership vote. Even more, the Sea Shell issue expands beyond the GLPYC and into the entire community, as many Sea Shell owners have boats in their garages and basements, waiting for future grandchildren to sail.

Once again, we call on the board to adopt the following three, very basic conditions:

Please sign the petition, leave a comment, forward this to others, and let the Board know how you feel by emailing them at: glpycct@gmail.com

On Nov. 20, 2015, the GLPYC Board announced that they will begin phasing out the historic GLP Sea Shell fleet and replacing them with Optimists ("Optis"), starting this summer, 2016. The phase-out should halt until the entire GLP community has a chance to discuss the issue and vote.

Whether you believe that Sea Shells should be replaced with Optis or not, this decision should not be made quickly, nor by a handful of people who happen to be in charge this year. The decision to phase out the historic Sea Shell fleet, which has been in GLP since 1953, affects the entire GLP community. Beyond the current beginner sailors and their families, this decision affects future generations, as there are Sea Shells waiting in garages to be passed down to future children and grandchildren. It is an issue that deserves careful deliberation as well as open discussion and participation among the entire GLP community. After open discussion, the decision should be brought to a membership vote.

If you are a GLP community member, of any age, please sign this petition to ask the Board for the following three basic conditions: