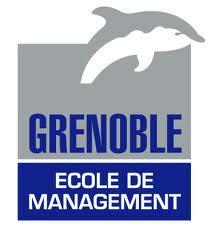 Please bring the innocent dolphin back, we want a better logo "Petition against the radical change GEM's logo"

Grenoble Ecole De Management 's logo was changed for unknown reasons. We are not against the change; still, we believe that the new logo was a wrong strategic move for the school and can destroy the reputation that program directors, Professors and students have being maintaining since the creation of our organization. The logo of the dolphin was a clear and perfect representation of the values and competencies that describe all of us and changing it might harm our visibility within the job market.

The Dolphin is a genial and friendly animal: it lives in social groups and develops strong links with its peers. It is dependable and loyal. The dolphin also seeks to perform and be at its best.

Grenoble Ecole de Management identifies with these values and wishes to share them with its students and all other partners.

Even if Grenoble is surrounded by mountains and 300 miles away from the Mediterranean sea, why does our logo have a dolphin on it? Here is the answer…

During the feudal period, the county of Viennois, which became later more or less the modern Dauphiné, was not part of the kingdom of France. Its ruler was named in documents Count (comes) and sometimes Dauphin (delfinus / dolphin) of Viennois. There was also a Dauphin both in Forez and Auvergne, but the origin of the name is obscure.

In the first half of the XIIIth century, the dauphin of Viennois adopted canting arms with a dolphin. This dolphin was a stylized fish with a curved back, a large head and a trunk, and had a spiny dorsal fin. It was also frequently crowned because the dolphin was then considered as the king of the fishes.

In 1343, Dauphin Humbert II was bankrupted and had no descendants. He ceded all his possessions to one of the sons or grand-sons of the king of France and received money and a life annuity in exchange.

Beginning with Charles VI, the county was given to the eldest son of the king, who was also the putative throne heir. When the heir was not the king's son, he was not called Dauphin. Dauphin was a usual abbreviation, the correct title being Premier fils de France et Dauphin du Viennois ('First son of France and Dauphin of Viennois'). The title of Dauphin de France, popularized during the reign of Louis XV, never existed.

The most famous Dauphin was Louis XVII (1785-1795), the son of Louis XVI, who mysteriously died in captivity during the Revolution. His tragic life motivated several romantic legends about him, and several impostors showed up and claimed to be the Dauphin , the most famous being Naundorff, a watchmaker of German origin.

The word dauphin is used as common name in French to designate the putative successor of someone important, especially in politics, and even to nickname the team ranked second in a championship.