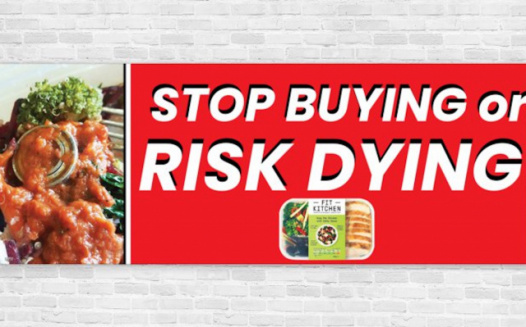 626 people have signed this petition. Add your name now!

High ranking doctor of food safety confirms the increase in risk of harm to the public caused by Sainsbury's (and other supermarkets) if they continue to sell products from Grimsby based Scratch Meals.

A business to whom some of Scratch Meals' complaints were misdirected to have logged 18 foreign object complaints in the past 12 months, 4 of which came in the last 3 months. This shows the increasing risk and frequency of someone being affected by Scratch Meals negligence to food standards

Since May last year, confused members of the public have reported instances of glass, metal objects, pieces of plastic and stones being found in Scratch Meal's products

Essex based freelance investigative journalist, Suzanne Coen was admitted to hospital in July and underwent a medical procedure after swallowing a foreign object found in one of the prepared meals produced by Scratch Meals. Ms Coen purchased the contaminated product from Sainsbury's store in Romford, Essex. Another Sainsbury's customer from Reading claimed to have suffered an anaphylactic shock whilst driving due to poor labelling of allergens on Scratch Meal's products.

By the current, increasing rate of these horrific complaints it is feared that at least six people could be seriously injured or lose their life as a result of Scratch Meals and Sainsbury's negligence between now and June 2020. This is just based on one range and one retailer, the extent of the risk is far more than this.

In a comment, BRC Compliance Audit Manager said: "We visited the [Scratch Meals] plant [on 27th September] and as a consequence [their] certification has been suspended. The site will need to put in place sufficient corrective actions and a further audit will be required for them to regain their certification status."