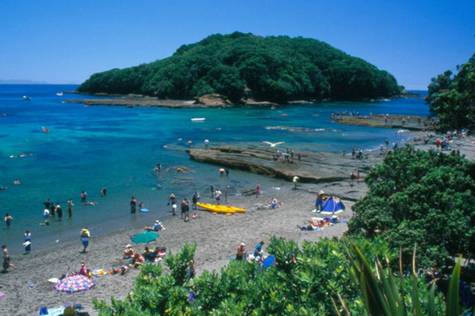 Today Toby and I would like to present a speech about Goat Island Marine Reserve being extended. Also the pros and cons of extending it. The numbers of fish in the Marine Reserve have gone down since the opening in 1975. People are fishing on the borders hoping to catch fish coming in, fish going out and the possibility of baiting fish out of the marine reserve with their bait.

Pros and cons, firstly the pros. The Ecosystem will be back to what it used to be like during the period from when it was opened in the 1970s. As you may not know the fish numbers have dropped in the Reserve. There are an estimated 375,000 people that visit the reserve each year. This number will drop through the reserve not having a lot of fish. It will be more of a tourist attraction being the biggest marine reserve in New Zealand. Which would boost the economy in the country. Now for the cons, yes the fishermen wouldn't like this because the Reserve would be extended into some fishing spots but I'm sure there's plenty more. If we don't act soon the marine environment will crumble due to the excessive amount of people fishing on the border of the marine reserve.

Thank you for listening and we hope we informed you of some of the current issues at goat island. Thank you